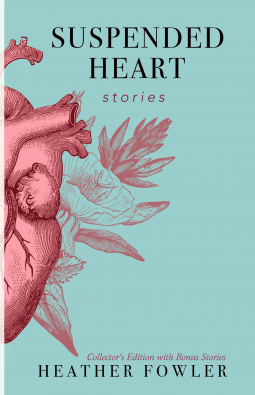 If you follow my reviews, you’ll know that Magical Realism is a great love of mine, especially when combined with Literary Fiction.Short Stories collections are on the rise and justifiably so. The ambiguous closures and underlying themes offer a thousand possibilities to demanding readers. Suspended Heart, a collection by Heather Fowler originally published in 2010, attracted my attention the minute I saw its cover. However, I knew I needed to proceed with caution because the anatomical heart on the front cover made me think of Maggie O’Farrel’s I Am, I Am, I Am and Jen Campbell’s masterpiece The Beginning of the World in the Middle of the Night. Unfortunately, my apprehension was (for the most part) justified.

This may seem an insignificant detail but I was far from impressed by the Dedication section. It should have been placed at the end of the book, in my opinion. It was too sappy for my taste and a sugary introduction isn’t going to win this reader. Anyway, there is always the benefit of doubt, right? Unfortunately, when you end up liking 8 stories out of the 20 included in the collection, there is definitely a problem…

Suspended Heart: A girl loses her heart in a mall. The heart remains there, suspended and worshiped, revealing the true emotions of the people who dare to stand in front of it, but what about its original owner?  Would our lives be easier if we didn’t have a heart to give?

Bloom in Any Season: A woman blooms -literally- waiting for her lover to return every April. This story is one of the most elegantly sensual texts I’ve ever read.

The Girl with the Razor Blade Skin: A girl is covered in razors. It is her only armour against a family and a social circle that is so narrow-minded to the point of being tyrannical. A story heavy in symbolism and social commentary.

Godiva: Lady Godiva has survived. She has been making her way through the centuries, changing faces, enticing the crowds by reflecting the nakedness of societies. But what happens when the young crowds in a city in the USA treat her like a common whore?

My Brother Made of Clay: The children of an absurd, highly dysfunctional family try to survive their parents’ indifference and cruelty.

Fear of Snakes: A woman is turned into a snake but only while she’s sleeping. A clever metaphor of the fear of men towards womanhood and independent identity.

The Rose Lamp: Buying antics is an action that requires caution. This is an atmospheric, mysterious story of premonitions, abuse, and change.

Channel 59: In a dystopia of the future, the government has launched a channel that aims to control the overpopulation by turning couples into strangers through addiction.Eerie and plausible.

And then, we have talking parrots smoking pot. Not a friend of those stories. They verged on satire and I am not a fan of the genre. Moreover, the emphasis on sex was cheap. For example, there is an interesting story of a pigeon that develops a bond with a young woman but sex (an unnecessary, highly gratuitous subplot) is depicted as something crude and dirty. Aside from the fact that I found this distasteful, it quickly became repetitive, boring and irritating. There is a difference between raw and disgusting. Having characters who desperately want to fall in love or at least have sex in almost every story is not my personal definition of Literature. Also, Red Riding Hood and Sun Tzu. In the same story. No.

So, I found this collection to be a highly mixed bag. There were stories that were memorable, good examples of Magical Realism but they were a glorified minority. 8 out of 20 isn’t exactly a success. Still, I’d suggest you read the collection and decide for yourselves. Personally, I wasn’t interested in the themes Fowler chose to focus on. She is not Jen Campbell. I won’t comment on the audacity of a reviewer who compared Fowler to Marquez and Kafka. I mean, have they ever read anything worthy at all? In any case, a three-star rating seems more than fair.

Many thanks to Pink Narcissus Press and NetGalley for the ARC in exchange for an honest review.