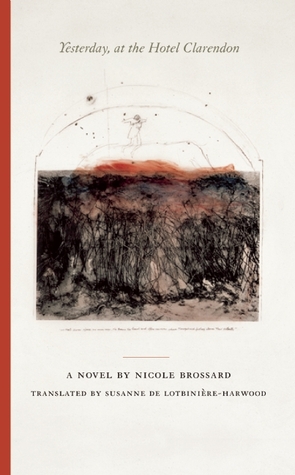 Τitle: Yesterday, at the Hotel Clarendon

‘’I take the opportunity to lend an ear to ambient life with an eagerness I never suspected. The idea of remaining calm doesn’t displease me. Some days I make sure everything is grey, like in November, or sombre, for I like storms.’’

In Quebec, in Hotel Clarendon, two women try to communicate with each other and share the sadness, the insecurity and sense of loss in a crucial moment of their lives. Two women who live and breathe Art and Culture and attempt to realize feelings and thoughts through the creations of the past.

‘’On Sundays, in summer, children play among the gravestones.’’

Nicole Brossard escorts us on a journey in Dublin, Venice, Rome, Montreal, Paris, Leipzig, Stockholm through the memories and experiences of a writer and a museum curator whose escape from the death of a mother and torturing love, respectively, comes through Art and Literature. In Descartes, the era of Knowledge and Reason finds a symbol, a man who overcame a terrible loss and went on to light the world with the fruit of his thoughts. With Enlightenment comes Culture and through Simone’s musings, multiculturalism comes into focus. Our world is a beautiful painting made from different images, convictions, and values that have created masterpieces over the centuries. However, can Beauty be enough when our heart breaks? I was very interested in the problematization whether ancient ruins can be seen as a reminder of death in life. Or should we say life in death?

‘’The room is poorly lit. A fine rain is falling on the lilac tree in front of the house. A leaden greyness is descending around the cars parked behind the apartment building, the grey of malls and conference centres lost between two highways. Life against a backdrop of Big Macs Shell Harvey’s and Pizza Hut.’’

Yesterday, at the Hotel Clarendon is a beautiful book that defies styles and formulas. Parts are written like a play, others like a memoir or a contemporary novel. With few instances of dialogue and tender, yet powerful, descriptions, the personality of each woman is clearly depicted and each voice is poignantly heard through Brossard’s poetic, elegant, sensual prose. The novel has an almost ‘’hazy’’, postmodern feel, interesting and demanding.

If this book were a film, it would be a creation by Ingmar Bergman. This is a novel to be read in the garden in a lazy summer afternoon, sipping cold tea. It is full of a charming, bittersweet aura of nostalgia. An old-fashioned feeling of a leather-bound book, a film produced in the golden age of cinema. It’s a book oozing (allow me the somewhat vulgar gerund) with culture and elegance. A haunting translation by Susanne de Lotbinière- Harwood.

‘’It’s still dark. A heavy rain is drenching the city. Standing behind the curtains I listen to the violence of the rain on the roofs, on the city. The water seeps into history, lifts up the earth, the grocery list a woman dropped when she darted into a fruit store. The sound of rain can be terrifying. I take for granted the freedom of water, the beauty of spring, the shade of the lilac trees yesterday, their fragrance. I take note, getting fired up about distant ruins.’’