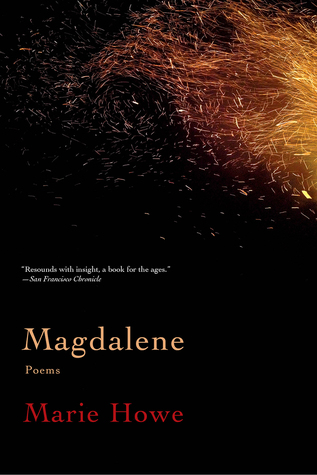 ‘’I liked Hell, I liked to go there alone relieved to lie in the wreckage, ruined, physically undone. The worst had happened. What else could hurt me then? I thought it was the worst, thought nothing worse could come. Then nothing did, and no one.’’

Mary Magdalene is a religious figure that has always fascinated me immensely. A woman whose life is wrapped in mystery, a woman who gave birth to more myths and legends than any other Biblical figure. An adulteress, a prostitute, a woman afflicted with seven demons. Who was she? Which of these versions is true? In my opinion, it doesn’t matter. Mary Magdalene is a woman whose love, devotion, faith, and resilience have been an example for women over the centuries, whether you are a believer or not. In this collection, Marie Howe creates a woman of the 21st century beyond the legend.

‘’The world that would have gone on without me bargained and cluttered and I walked where I wanted, free of the pretense of family now, belonging to no one, back to the place where he’d bent and written in the dust. (He was man among men- he knew not to look at them.) Whatever he’d scribbled in the dust wasn’t there anymore, but he was standing with his friends in the shade of the temple wall. ‘’

Magdalene becomes a woman who struggles across the centuries to find some form of meaning and purpose that could replace the void in her heart. A void created the moment the man she loved was taken from her. She lives her life as a lover, a mother, a working woman. She fights her way through empty sexual encounters, depression, isolation, and a deep disappointment because the world has failed, the world did not deserve such a terrible sacrifice. Her voice is bitter, angry, tired. She has almost given up waiting for someone who hasn’t yet chosen to return. The glimpses of hope are weak and briefly seen.

Howe’s writing is powerful, raw and fascinating. If you are easily offended, then this collection might not be for you. However, I strongly suggest you try to free your mind and see Magdalene as a woman who loved with ferocious strength. I am one of those who strongly believe in the human nature of Jesus along with everything this signifies. Therefore, this collection has found a place in my heart.

‘’When he went to the garden the night before

And feel with his face to the ground

What he imagined was not his torture, not his own death

That’s what the story says, but that’s not what he told me.

He said he saw the others the countless in his name