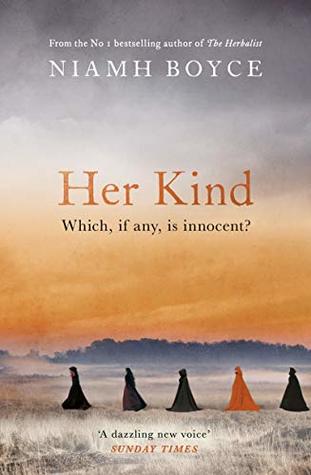 ‘’Our eyes will go to the worms

And our livers will be given as food to the parish dogs.

The hair will be torn from our heads

The flesh flayed from our bones.

In the remains of our vomit

When we are damned, my sisters.’’

When something becomes ‘’fashionable’’, quality goes down the drain. Nowhere is this more clearly demonstrated than poor Literature which is viciously disregarded of late. I have come to think (and I hope I am wrong) that stories of witched have become a vehicle for writers devoid of ideas and possibly lacking the ability to escape of a theme en vogue destroyed by horrible dialogue and cliched choices. The extract at the beginning of this text is the best feature this book had to offer.

A mother and a daughter seek refuge in the hall of a noblewoman. We are in Ireland, in County Kilkenny during the 1300s and the religious conflict with the Gaelic people as victims is in full swing. Witchcraft, Irish tradition, the customs of a turbulent era and the Gaelic convictions are strong ingredients. The scene of two women who have nowhere to turn to and a past full of secrets are familiar motifs but no less attractive for that. Who wouldn’t desire to live the haunting experience of a true All Hallows’ Eve, the frenzy of Beltaine, the sultry night of Lughnasa?

This was a world where a woman was considered a spinster at eighteen. The restriction imposed by the Church, the position of women in a society that had the witch-accusation on the ready. Nothing we haven’t seen before, therefore it is the execution that matters. And the execution wasn’t good, in my opinion. In fact, I thought it was actually horrible.

The characters are the same old female protagonists that populate Historical Fiction, wandering in the forests, the streams, and the castles, trying to sound smart and advanced for the era. Of course, this is the choice of lazy writers. So, here we have a mother, a sister, a daughter, a grandmother. Generations of boredom and stereotypes. Vanity, faith and the need to form a life of your own are excellent themes. The problem is that we have seen this many times, executed in a much better and coherent way. And please, stop with the ‘’based on a true story’’ and the ‘’need to uncover a forgotten woman’’ cliches. They don’t work with veteran readers. They may be adequate for teenagers but not for us. The chapters are ‘’clumsy’’, the prose is simplistic, the descriptions duller than dull.

I am afraid that for someone who has read a billion Historical Fiction novels with similar themes, this book was a rather negative experience. In the end, I had absolutely no interested in the fate of the characters (not to mention that the end could be seen chapters and chapters earlier…) and the writing failed to transport me to my beloved Ireland. This speaks for itself. By my standards, this novel was extremely disappointing.

Many thanks to Penguin UK and NetGalley for the ARC in exchange for an honest review.