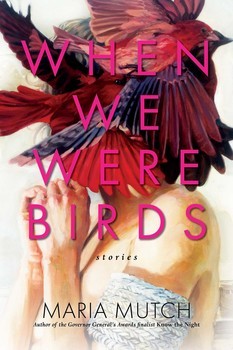 Title: When We Were Birds

‘’Snow falls on the shoulders of people passing, it lands on the pavement and vanishes, more lands and sticks.  She watches the crystals clump, tumble, and it is twilight and the lights of the restaurants and shops turn amber. She feels a snowflake land in her eye, no nictitating membrane to sweep the cernea. The insides of buildings still fascinate her.’’

In New York, nothing is as it seems. In Manhattan, in Brooklyn, in Harlem. In the heart of Central Park. People live their lives in the shade of the skyscrapers and the lights of Broadway. Nobody notices anything. Nobody notices birds behaving like human beings. Nobody notices people defying the human laws and obeying to their avian instincts. Folklore, myths and nature in a beautiful, eerie collection by Maria Munch.

Munch is inspired by taxidermy and the theme of metamorphosis and writes about womanhood and transformation from within. The avian world represents mystery, knowledge, wisdom, and freedom. The characters in the stories struggle to change, to find the necessary knowledge and gain their freedom. With references to Homer, Ovid, and Greek Mythology, the writer creates her own Odysseus, Persephone, Orpheus, Aeneas and gives birth to stories of mysticism, lyrical sensuality, raw emotion. Enriched with atmospheric black-and-white photos, this collection is a marvelous example of the powerful and haunting mixture of Literary Fiction and Magical Realism.

These are the six stories that have stayed with me:

The Peregrine at the End of the World: A story about window-cleaners and an attractive peregrine that becomes a woman. Modern, haunting and poignant.

Sea Of Love: A powerful exploration of the relationship and the estrangement of a married couple through metaphors of water and storm.

Captivity: The eerie musings of a woman in an asylum.

Messages From the Snow: Sasha’s body becomes a living ‘’notebook’’ for messages written by troubled souls that live inside her. Literally. Even though this may sound like a scene from the perfect film ‘’The Exorcist’’, this story is a heartfelt account of a relationship between a troubled daughter and a mother that struggles with dementia. The highlight of the collection, set during a rather heavy winter in New York.

When We Were Birds hides a dark surprise in each story. This strangely fascinating collection shows that Magical Realism and Literary Fiction are the genres that remind us why Literature makes our life beautiful and weird.

‘’When the water came, it swallowed me and then I swallowed it. Conversion was a struggle between me and the person I had mistaken for me. Bubbles rushed, sparkling, to the surface. They hustled away limitations and boundaries, and at times I seemed to be the ocean.’’