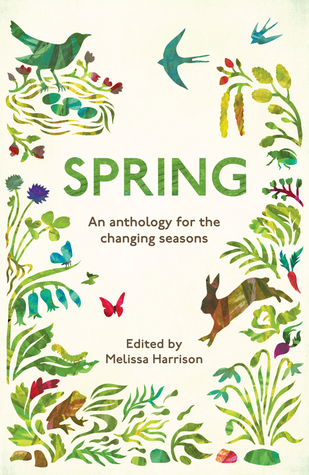 Title: Spring: An Anthology for the Changing Seasons

‘’It is Spring, moonless night in the small town, starless and bible-black, the cobblestreets silent and the hunched courters’ – and rabbits’ wood limping invisible down to the shoe-black, slow, black, crowblack, fishingboat- bobbing sea. The houses are blind as moles (though moles see fine tonight in the snouting, velvet dingles) or blind as Captain Cat there in the muffled middle by the pump and the town clock, the shops in mourning, the Welfare Hall in widows’ weeds. And all the people of the lulled and dumbfound town are sleeping now.’’

On my way to work, I realise that spring is hesitatingly knocking on our door. Even though the changing of the seasons is an abstract notion in Athens, working in the northern suburbs of the capital, far from the city centre, has quite a few perks (if we exclude the fact that taking the Athens Tube and sitting side-by-side with an unimaginable number of idiots and low quality people lowers my IQ…) As I watch the tress acquiring life once again and the days lengthening, I can feel the sweetness in the air and this special weightlessness. Although spring is my least favorite season, the arrival of Easter gives me such joy that I can ignore the allergies and the irritating pollen flying and sticking everywhere. This anthology is my final stop on a beautiful journey curated by Melissa Harrison.

‘’I don’t think any artist, using the subtlest brush strokes and softest of hues, could capture the rich colours and sounds and scents of the evening. Is there a poet who could fit the rhymes and beats and randomness to the rigidity of a sonnet or haiku, even with the cleverest metaphors? No orchestra could mimic the mellow simplicity and the startling complexity of this unrehearsed, yet harmonised soundtrack. The sun has set on this Suffolk spring evening.’’

Toads, swallows, hedgehogs, foxes, bumblebees, deer. Badgers, otters, magpies playing in the woodland while bluebells, mandarins, anemones, unopened buds in the night garden. Travel to some of the most beautiful corners of Great Britain: Cambridgeshire, Buckinghamshire, Hertfordshire, Cumbria, the Highlands, Bodmin Moor, the Yorkshire Dales, Chesil Beach, Oxfordshire, Suffolk. Take a stroll and enjoy the spring evening in the company of beautiful texts and extracts by famous writers and lovers of the flower season.

‘’There is a spiritual feel to the wood tonight that I don’t think I’m imagining. Perhaps it’s expectation, and awe that this recently denuded scene is now bursting into life again. The winds have stopped and our sense of anticipation seems to be shared by nature, waiting with us. A blackbird shrieks an alarm call in front of us, as if to dispel such romantic notions.’’

A beautiful text on the coming of spring in the Highlands by Annie Worsley. Highfield, a beautiful poem by Alan Creedon. A moving text on fatherhood and the bond between the generations accompanied by the sweetness of the birdsong by Rob Cowen. A vivid description of the change of seasons in the North by Elliot Dowding, the thoughts of a teacher on children and baby owls by Nicola Chester and a beautiful confession of the isolation that has now become the companion of every city resident and the change most of us undergo when the opportunity to come closer to nature occurs. A joyous text on the coming of spring in the city by Melissa Harrison and an ode to Sakura, the cherry blossom, and the unique relationship between flora and the Japanese culture.

And then we have the greats joining the spring fest. William Shakespeare’s Sonnet 98. An extract from Jane Eyre by Charlotte Bronte and from Mansfield Park by Jane Austen. Thomas Hardy. The preparations of the Mole for the coming of the season or How to Do Spring-cleaning in The Wind In The Willows way by Kenneth Grahame. Dylan Thomas and a beautiful, haunting text on the silent, hesitant spring nights taken from Under Milk Wood. A dark, atmospheric passage on the death and rebirth of Nature by D.H. Lawrence. And so many more…

I am going to miss the series. The only thing that would make me feel better is to have an anthology dedicated to each month. That would be ideal…

‘’Only you can hear the houses sleeping in the streets in the slow deep salt and silence black, bandaged night. Only you can see, in the blinded bedrooms, the combs and petticoats over the chairs, the jugs and basins, the glasses of teeth, Thou Shalt Not on the wall, and the yellowing dickybird watching pictures of the dead. Only you can hear and see…’’

‘’And the seasons roll through our literature, too, budding, blossoming, fruiting and dying back. Think of it: the lazy summer days and golden harvests, the misty autumn walks and frozen fields in winter and all the hopeful romance of spring.’’