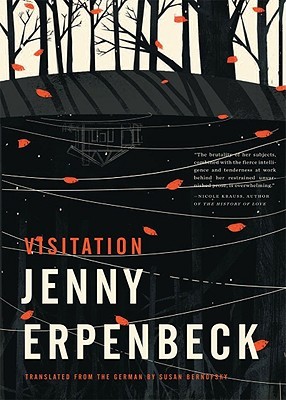 ‘’In a household where a death has taken place, the clock must be stopped at once.’’

It is easy to stop the clocks when Death has arrived in a house. The rules are simple. Stop the clocks, cover the mirrors, open the doors and windows to let the soul fly free, whisper it to the birds and the bees. What happens when Death has covered an entire country under a dark veil? What happens when Death has conquered an entire continent, the entire world with Hatred and Tyranny as his faithful followers? You cannot stop the clock nor cover the mirrors. You cannot turn back the time, you cannot search for a new home. You can only pray that the suffering will not last long. This is the journey of the characters in this outstanding book by Jenny Erpenbeck.

‘’The dandelions are the same here as back home, and so are the larks.’’

A house by a lake outside Berlin stands witness to a turbulent, troubling course. From the days of the Weimar Republic, through the bloody path of two World Wars with devastating results for the country and the entire world, stopping in a nightmarish terror state reflected in the German ‘’Democratic Republic’’ (what a choice of words to name a totalitarian factory of deceit and oppression….) to the Reunification and a fragile future. 12 characters, whose lives are irrevocably depended on and altered by the fate of their land where the notion of ‘’home’’ has been lost, in a haunting, dark version of Chaucer’s Tales, albeit much more powerful and poignant. Dark fables narrating a journey of loss and violence.

‘’Now no one knows she is here any longer. All around her everything is black, and the care of this black chamber is she herself. The circumstance that there isn’t even a narrow crack to let the light in is intended to save her life, but it also means there is no longer anything differentiating her from the darkness.’’

Jenny Erpenbeck writes unlike any other writer I’ve ever had the fortune to read. I have never come across such a powerful blend of darkness, poetry, exposure of the subconscious, dread for what is to come and deep sadness and guilt for all that could not be prevented. This is evident in her masterpiece The End of Days and in Visitation. Her writing is like a glorious ivy that grows and grows and still has certain parts that are unseen by the sun.  Beautiful symbolism, clarity through metaphors, themes that are linked to each other, images that are lurking in a cold corner, waiting to enter your mind. Customs of marriage and death co-exist with memories of a bloody past, a terrifying present, a hope that something will change. Once again, War shows itself as the greatest culprit, a plague not by God but by human beings that are ignorant of every basic virtue and sense. War as a chance for uneducated fools to exert control. War as the ultimate weapon for tyrants. War as the nightmare that will always be by our side as long as the human race exists.

‘’When you’ve arrived, can you still be said to be fleeing? And when you’re fleeing, can you ever arrive?’’

The Architect is the symbol of the open wound of a country torn in two, reflected in the presence of the S-Bahn, walking in the streets of a divided Berlin, reaching Friedrichstraße. A girl of Jewish descent tries to save herself in a story that immediately brought Polanski’s The Pianist to mind. A farmer tries to arrange his daughters’ fortune, an officer of the Red Army is defeated by his own weapon, a writer tries to satisfy everyone in order to buy a house, a visitor is a stranger among strangers. At the centre of the journey, we find the House and the Gardener whose life becomes dependant on it. I felt that the Gardener was given the most prominent role, perhaps as a symbol of our capacity to plant and reap, to create and to destroy. Our dubious connection to Nature, our desire and ability to create beauty and the million ways we invent to rape her and her creatures.

Keep in mind that these aren’t characters in the traditional sense of the word but symbols, archetypes of the people who have experienced the tragedy and horror of War throughout the centuries. They represent fears, hopes, shattered dreams. Resilience and Faith. It would be a mistake to consider them as actual characters.

Beautifully translated by Susan Bernofsky, Visitation is a literary masterpiece created by a writer who clearly demonstrates that even the most unutterable horrors can acquire an eerie, frightening beauty in the hands of a truly gifted artist. This is true Literature, a word we have begun to forget…

‘’To whom do these words now belong in such darkness?’’

This is a beautiful review by Michel Faber published in The Guardian: