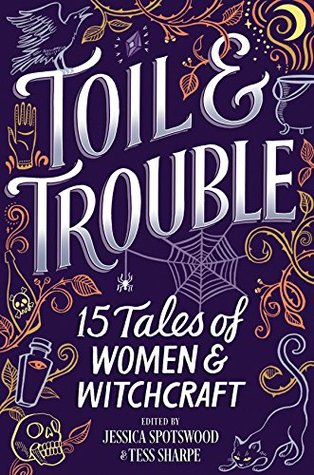 If we substitute the word ‘’witch’’ with the word ‘’woman’’, we will be able to understand the reasons and motives behind the terrible witch-hunts that left another bloody mark in History. The complexity of women’s psyche, the direct, unbreakable contact, and bonding with Nature, the innate strength to survive, the resilience, the passion, the intelligence. Witches or not, men have always gazed upon women as a possession. If she cannot be ‘’obtained’’, if she resists then she has a mind of her own. How dare she? She must be dancing with demons and lying with Satan. Fundamentalism and society have long found a way to justify the wrongs committed by men.

This beautiful collection contains stories of young witches from different eras and nationalities. Focusing on the themes of revenge and injustice, these tales are told through the eyes of young women who try to cope with their gift, their heritage and their feelings in communities that are unable to understand and to accept. Naturally, not every story is a gem and there are some that are too YA influenced for my taste but this is a collection that has a lot to offer to the reader regardless of age or gender.

Starsong by Tehlor Kay Mejia: A teenage astrologer who uses social media to draw charts and chase her demons away. Beautiful writing, an interesting debate between science and magic.

Afterbirth by Andrea Cremer: A story of a birth going horribly wrong for a woman who was a midwife and a healer, set during the era of the Witch Trials. One of the finest stories in the collection.

The Heart In Her Hands by Tess Sharpe: A young witch goes against the will of the Elders in order to remain with her true soulmate. I can’t say I enjoyed this story. It seemed too naive and copy-pasted from teenage films.

Death In The Sawtooths by Lindsay Smith: In a city echoing New Orleans, in a community of witches and warlocks, a young woman serving the Lady of Death accepts the confessions of the dead in a macabre role of the Last Messenger. This was a story that started exceptionally well but lost focus and quality along the way. Still, it was very atmospheric and memorable if you overlook the naive, mundane, unnecessary use of certain supernatural creatures that seem to be fashionable because of that atrocious ‘’Walking Dead’’ (or whatever it’s called…) thing.

The Truth About Queenie by Brandy Colbert: Teenage sentimental problems mixed with racial issues may sound interesting to many readers but not to me. Add cliche dialogue and a predictable, cringe-worthy plot and this easily becomes an ugly piece of writing judged by my personal standards.

The Moonapple Menagerie by Shveta Thakrar: Moonlight and Indian culture is a beautiful combination but the dialogue in this one was jarringly irritating.

The Legend of Stone Mary by Robin Talley: A story whose roots go back to the Civil War era. A tale of witches, witch-hunters and a frightening statue. But for the silly love plot, it would have been marvelous.

The One Who Stayed by Nova Ren Suma: This story read like a predictable, ridiculous horror film about cruel teenagers with a little bit of ghost revenge to add another cliche in the mixture. No…

Divine Are The Stars by Zenaida Córdova: A story of family, loyalty, magic, and faith mixed with elements of the Mexican culture. Extremely well-written and atmospheric.

‘’I just want to bite a hole in the world. I wish I could stop smiling at things I hate. Sometimes I wish I never learned.’’

Daughters of Baba Yaga by Brenna Yovanoff: A story of a powerful witch-girl of Russian heritage. A haunting setting and one of the finest moments in the collection.

P.S. I adored the references on Nikola Tesla.

‘’The moon is full, and even the stars are scared of me.’’

The Well Witch by Kate Hart: ‘’But she would leave a light on like she’d promised. If she had to burn the whole thing down.’’

This story is so perfect it deserves its own novel. Elsa is a one-of-a-kind character in a tale of ruthless men during the Reconstruction era. A water witch, love, bravery and Comanche traditions. My favourite story in the collection.

Beware of Girls With Crooked Mouths by Jessica Spotswood: A witch family from Scotland, each girl dedicated to an element. But the daughters don’t live long except for one. Only one will survive. The witches go mad. They murder their sisters as the Book commands. And they have obeyed for hundreds of years. Now a young witch has decided they must defy the tradition. A brilliant story possibly set in the Regency era.

‘’As I thought of these things, I caught la Virgen in the corner of my vision. Beneath Her blue veil, She cast her eyes to the church floor. But Her lips held a small smile, as though She will always see the love we carry in our hearts long before we understand it to be there.’’

Love Spell by Anna-Marie McLemore: A story rich in Mexican traditions. A tale of a strange love between two seemingly opposing worlds. Beautiful and moving.

The Gherin Girls by Emery Lord: A story of sisterly love, abuse, and isolation set during the fall equinox. The problem is that the writing was so naive, so dull that I just didn’t care.

Why They Watch Us Burn by Elizabeth May: An alternative USA where rape victims become outcasts, looked upon as temptresses who provoked ‘’honest’’ men. They have to be taken away, otherwise, they will contaminate the ‘’purity’’ of the society. Although atmospheric and haunting at parts, I felt that this context has been overused to death and I don’t believe that its remarks on religion added anything innovative. A story clearly inspired by Atwood’s The Handmaid’s Tale and the awful, ridiculously Hollywood-esque TV series that tried (in vain) to bring an excellent book to life. A mediocre story, in my opinion.

It was lovely to read each writer’s favourite literary witch and I was excited to see that Morgan Le Fay was the most popular choice.

My two complaints were the occasional teenage writing that echoed TV series, films and possibly books devoid of quality and substance, and the emphasis on sex as a form of emancipation. I don’t agree with the ones who view this as an exploration of sexual identity. This isn’t how it’s done. In my opinion, sex and sexual preferences do not make us rebels or emancipated, feisty and independent. Our personality, intelligence, and intellectuality do that. Sex has nothing to do with who we are as people. However, I definitely appreciated the diversity and honesty of the themes in the stories. I wish certain tales had made better use of such strong elements.

Apart from these issues, this is a collection to be read by all. And if I ever have a daughter, I will definitely include this book in my recommended reading list to her.

‘’My witch is furious and ferocious. She doesn’t grant wishes. But if you do what she says and treat her right, she just might help you. In the stories, there’s always a catch, though, right? The catch is this – her way of helping is HER way. Sometimes the way she helps you is by raining fire on all your enemies.’’