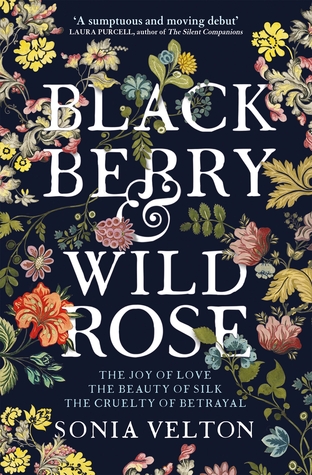 ‘’But there are no secrets in London. Even the houses lean across the narrow alleys towards each other and offer up their scandals in the blink of an open curtain.’’

A woman is trying to break the norms of an oppressive society whose chances are reserved exclusively for men. In an era when silk is considered equal to gold, Esther struggles to convince her husband of her talent as a pattern designer. Her kind nature leads her to Sara, a young woman trapped in a brothel, and to a complex network of deceit and exploitation. Welcome to London during the 18th century.

A stunning cover and a beautiful title. An adventurous era, a very interesting field of research. This is the background of a novel focused on the lives of two young women and the conspiracies of silk. The problem is that sometimes a book needs an interesting cast of characters in order to become something special and memorable. Unfortunately, I couldn’t find it here. The atmosphere is excellent and beautifully depicted through balanced writing that is realistic and faithful to the era without becoming modernized or crude. The dialogue is equally satisfying, interesting and believable. The fascinating and sinister world of silk is at the heart of the novel and I believe it should have been explored more thoroughly. Esther’s ambitions and talent along with the enterprise of the glorious material should have been given the first role. These should have been our protagonists instead of wasting our time with a character that had no redeeming, or even remotely interesting, qualities…

Esther is based on Anna Maria Garthwaite, the woman who brought painting to the loom, creating unique designs, as the writer informs us. Perfect! Why did we need to read the ‘’adventures’’ of a mediocre character? Esther is a complex woman. In my opinion and according to my personal values, Sara is a disgusting figure. Her weird notion that she is somehow entitled to a life with plenty of money and little effort, the fact that she is a complete and utter fool, a treacherous creature who curses her bad luck and turns against the one who helps her did little to make me sympathize with her. As a result, her chapters were a chore. Compared to Esther’s complexity and innate elegance, Sara seemed a shadow of a character. I did not care for the closure of her story, it was completely indifferent to me. Moll was even worse…In my opinion, the writer painted the female characters in extremely unfavourable colours by making use of every cliché imaginable… Not that the men were any better. Generally speaking, the characters won’t enter any Literary pantheon anytime soon. Rather the opposite and this issue affected my overall impression significantly.

Also, ‘’Elizabeth Swann’’? Seriously? I was expecting Jack Sparrow and Will Turner to appear…Which would have been great because these three are awesome. The characters in this novel…not so much…

In my opinion, Historical Fiction is a mighty difficult genre. You need the perfect ingredients to create a novel that will stand out. This book is (mostly) well-written but I don’t think it is memorable or unique. Had the characters been better, I would have enjoyed it more. As it is, a 3-star rating is the most I can give.

Many thanks to Quercus and NetGalley for the ARC in exchange for an honest review.