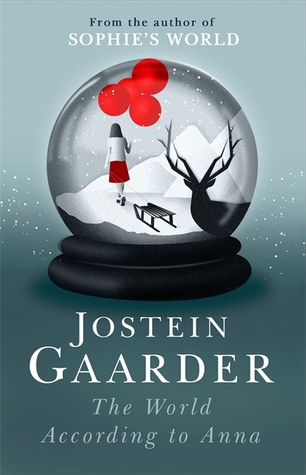 Title:The World According to Anna

‘’Do you know what I want? Shall I tell you? I want a million plants and animals to come back from extinction. No more, no less, Nona. I want to drink clean water straight from the tap. I want to go fishing in the river. And I want this clammy winter weather to end.’’

I remember I was thirteen (or thereabouts) when I first read Sophie’s World by Gaarder. The bookshop lady told me that it would be too difficult for my age but little Amalia had already developed her maddeningly stubborn, hugely- unresponsive- to any guidance- from any source self. And I marched straight ahead, holding the book -translated in Greek- tightly. I was hypnotized. It was the novel that introduced me to Magical Realism and I’ve always considered it a twin (although not as beloved) as The Little Prince. Years and years later, I ‘’met’’ Anna in this beautiful novel that laments the gradual; and certain decline of our planet.

Anna, a sixteen year old girl from Norway, is deeply concerned about climate change and its dreadful results. Anna and Jonas are trying to raise awareness in their school community when she realizes that she is receiving dreams from a superb source. Her great-granddaughter, Nova, lives in 2082 and her daily life doesn’t include the species we all consider as granted. Our planet’s human population during Nova’s era is a little below one billion… Anna and Nova try to fight the disaster on two fronts in a story that is powerful, moving and frightening.

The descriptive passages are beautiful in their clarity and their impact is severe. We start wondering what could happen if we actually witnessed the outcome of our generation’s behaviour towards the Earth’s resources. What would happen if our great- grandchildren had the opportunity to demonstrate the wounds caused by our reckless choices? Where would the beauty of God’s creation be if 60% of all species vanished? War, famine, death. These would be -will be- the crops we’ll come to reap if we don’t realize the rapid decline of the world around us. We like whining, saying that we have inherited a damaged world. Gaarder shows us through ruthless, poetic prose that our generation will surely bequeath ruins and ashes. A damage that will prove impossible to repair. Perhaps the clown who likes to call himself ‘’President’’ would like to read this novel to understand that climate change actually exists. Oh, wait, I forgot. He obviously doesn’t know how to read…

The dialogue was the only weak part, in my opinion, hence the 4 stars. It is a work originally written in Norwegian and perhaps the translation wasn’t the best. Especially the interactions between Anna, Jonas, and Benjamin sounded wooden, unnatural. The parts between Anna and Niva were much better. They are interesting, sympathetic, determined characters and their thoughts and decisions fully reflected their personality. I suppose the translation didn’t succeed in expressing the unique tone of the Norwegian language.

This is a terrifying read. It should be. It informs us, it throws the consequences of our actions in our face without mercy, guided by two extraordinary young women. If each one of us did 5%of what they did, there would be a chance to turn things around. As it stands and seeing that the world’s leaders couldn’t care less (what DO they care about, I wonder…) my hopes are non-existent…

‘’Perhaps intelligent life exists only on her planet. But what if, one day, there are no humans left? Will the stars and planets live on, with no one to look at them?’’