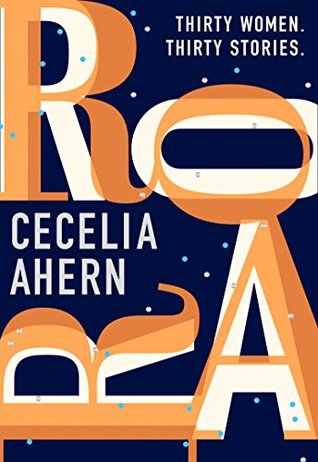 30 stories of 30 women. 30 captivating titles that lead us to the sphere of Magical Realism and allegories. 30 stories that aim to give voice to characters who struggle with issues that make our lives a little more difficult and demanding, especially if we are women in a frenetic era. A collection by Cecelia Ahern that I would characterize as underwhelming, repetitive, superficial, pretentious.

A woman whose chromosomes are failing her, causing her to disappear. A woman placed on a shelf, exhibited as a trophy. Guilt becomes a plague of bite marks for a working mother. A wife eats photographs to relieve happier memories. Another discovers that abandoning herself and her career how created a peacock feather inside her brain. These are the stories that spoke to me and made me continue reading, trying to discover something original and meaningful in the majority of the material. Unfortunately, it wasn’t meant to be….

The Woman Who Had A Ticking Cloak was rather mediocre. That famous -or infamous- ticking clock that calls for us to be mothers doesn’t exist in all women de facto and it is high time society accepted that and move on. The Woman Who Returned and Exchanged Her Husband was irritatingly bad. The Woman Who Walked In Her Husband’s Shoes managed to baffle me so props for that. I don’t know what Ahern tried to communicate with this story. Gender identity? Insecurity? Whatever it was, it seemed tacky, badly composed. The Woman Who Wore Pink was the epitome of weak writing over themes that have been dealt with again and again by much better writers than her. As it were, the result was rather tasteless. The Woman Who Spoke Woman demonstrated some of the worst writing I’ve come across in a while…

In my opinion, most of the stories were bad. Plain and simple. Issues that are considered relevant to most of us were executed in a way that had little to do with Magical Realism or Contemporary writing. The only redeeming quality was the choice of presenting the stories are urban fables which made even the worst moments in this collection a little more bearable. Speaking strictly for me, I can’t say I can relate to the majority of the issues presented but this is an entirely subjective attitude. What I can objectively state is that the way most of the stories are presented are cheaply melodramatic. It may work for many readers but it never works for me. Why such an emphasis on sex? Not every woman cares for sex or relationships of any kind and 30 stories seemed too many since the same themes are repeated over and over again. And the dialogue? My God, was it horrible…

Cultural and gender diversity was a welcome feature. Ahern tried to place focus on the themes of motherhood, insecurity, pressure. The feeling that your body doesn’t obey you anymore. The trap of forsaking your dreams for the sake of a family forgetting that being a mother and a wife doesn’t cancel the fact that you are a human being. Sadly, even if I could honestly say that I am interested in these issues, 30 stories of the same blurbing get easily mundane, in my opinion.

My first Ahern novel was The Marble Collector which proved to be a satisfying choice. After it came Lyrebird which was seriously disappointing. I faced the same issues with ROAR, a collection that was anything but fierce and rebellious. When all is said and done, I don’t think I will try my luck with another Ahern book in the foreseeable future. Her writing and the themes she chooses to emphasize are not for me, I’m afraid.

Many thanks to HarperCollins and NetGalley for the ARC in exchange for an honest review.