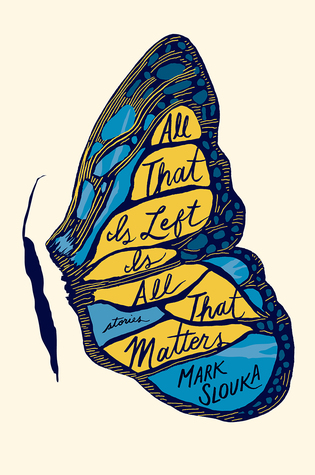 Title: All That Is Left Is All That Matters

‘’The world doesn’t care for us – we pass through its rooms like ghosts. You can hear it, sometimes, laughing, celebrating, and when we take our leave it’s no more than the shift of air through an open door that someone forgot to close.’’

Slouka’s stories take us on a journey to the way life in the USA has been perceived by people who chose to seek the dream of a better fate. Coming from a Czechoslovakian background, he chooses characters that are mainly immigrants on the point of giving up, of retreating under the pressure of failure and disappointment. They are disappointed in themselves, their loved ones, the world around them. From former Czechoslovakia to the USA, these are people on the brink of despair, trying to cope with the loss of hope and love, wounded by the unjust treatment of a harsh, distant society.

A man finds out about the death of a family in a most tragical way. A married couple realizes that love is suddenly weakened. Children try to make amends of their parents’ faults, men struggle to win a woman’s heart in extremely questionable circumstances. What connects the stories is the feeling that every attempt to move forward is probably futile and the small successes that became reality proved to be insignificant in the long run. The themes Slouka focuses on are poignant and always relatable to our era. However, I cannot say that this collection left me satisfied.

The writing is cryptic, a combination of contemporary style mixed with a kind of language that resembles the 50s. In my opinion, this was not effective. I found the overall tone to lifeless, detached, too old-fashioned to grasp the attention of a reader who has read a plethora of similar collections. It’s not just the old-fashioned writing. The projected views are also outdated, centered on a stereotypical view of the immigrant man that has been unable to move forward in many aspects. As a result, the pattern is repeated too many times and the stories themselves become mundane, forgettable. The characters are uninspiring, flat, frightfully one-dimensional. Furthermore, the writer focuses on men and almost forgets the existence of women. When they are present, they act as characters who either hinder the men’s ‘’progress’’ or who act as the main source of disappointment. I am sorry but this is not a way to earn the attention and respect of a demanding reader. I checked twice in order to make sure that the collection wasn’t written after the Second World War, this is how unoriginal and dated it felt. In addition, the pessimism and futility emanating from every character in every story seemed to me unrealistic and exaggerated to the point of being a series of caricatures.

Despite the brief moments of undeniable beauty, this collection gave me nothing. No story stayed with me, no theme haunted my thoughts, no character spoke to my heart. Perhaps, I wasn’t the right audience. Perhaps the writer aimed primarily to speak to the hearts of men, I don’t know. What I know is that Mark Slouka is not a writer I will seek to read again. However, I do recommend you try one of his works and see for yourselves. Chances are you will find more than I did.