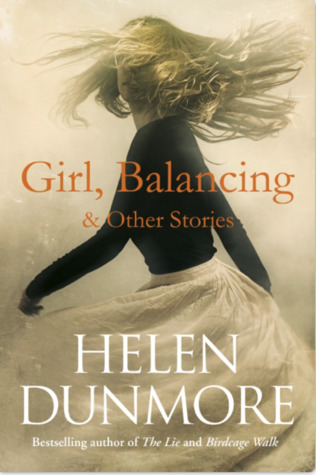 ”Outside, the fog that had hung over the city for days had blown away, and there was a cold, wild look to the sky.”

I found out about Helen Dunmore’s passing not long after I read her final novel, Birdcage Walk, one of my favourite Historical Fiction works.  The Siege was one of the very first books I’ve read in English and since then I’ve always associated Dunmore with stories of the past, told through atmospheric, realistic and very humane writing. Girl, Balancing & Other Stories is a collection of mostly unpublished short stories by Dunmore, a posthumous offering by one of the most important British writers of the last three decades.

”She hears nothing and everything. The night is still. Not a branch stirs. A tawny owl cries softly; a males, she thinks, a locating cry. At night the wood sounds even closer than it is, as if it laps the walls of the house like water.”

Opening with a moving account by Dunmore’s son, Patrick Charnley, the collection consists of three parts. The first four stories narrate four different moments in the life of a young woman, named Nina. Her storyline was my favourite in the collection. Cradling is centered around her childhood and describes a beautiful moment of domestic tranquility, of the security provided by our parents, the way a hung by mum and dad can cure the most vicious earache. The Towel and The White Horse narrate the insecurities and struggles of trying to form your own path, away from the safety of your home, and the titular story is darkened by the visit of a young man who seems to hide a multitude of issues. In my opinion, this story sets the tone of the entire collection.

While there is no common theme connecting the stories of the Present and the Past sections and no character appears twice – with the exception of Nina – the atmosphere throughout the stories is misty, almost heavy. There is an underlying sadness and a strange feeling of threat and loss in the majority of them. Some of the stories seemingly end abruptly, but I believe that this is the essence of this collection. The questions of ”what could happen now?”, ”what could have happened?”, ”what was it all about?”. I love open-ended stories when the writer knows how to construct them in a satisfying way, leaving you wondering and speculating.

It would be difficult not to relate to the stories in this collection. Motherhood, multicultural communities and the ways they shape the residents’ personalities, uncertainty, fear, old age, despair, loss, war, the teacher-student dynamics, religion, the relationship between the two sexes. Stories taking place in urban settings full of life and adversities and in haunting villages made of myths and low expectations. A professor hides more than he confesses, unable to move on after a serious break-up. A woman is afraid of an unseen, unnamed force and struggles to protect herself and her family. A young teacher travels to Sweden to start a new life and meets a strange ballerina. A young woman falls in love with the wrong man in the wrong era. Grace Poole, arguably the most mysterious character in Jane Eyre, decides to share her memories of Mr. Rochester. The Zeppelin brings terrors in London. So many stories, such wealth of language, themes, and characters.

This collection is the finest swan song of a writer full of sensitivity, talent and an immense grasp of the complexity of human nature. An artist that was taken too soon, a severe loss in the literary world…

”You can live an entire life between one breath and the next. That’s where my life was upset, in one night, in one room. The rest is memory.”