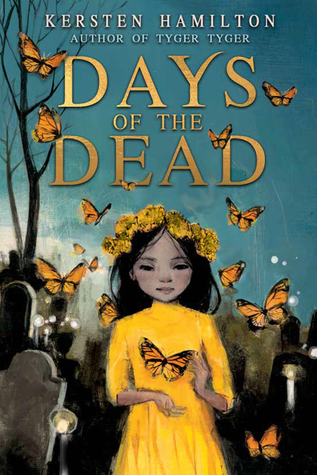 Title: Days of the Dead

*Any political comments will be deleted immediately.*

‘’Magic flows through Epoch, New Mexico. It seeps from the bones of Puerta de la Luna, a village that was hundreds of years old before the United States invaded Mexico and took this territory for its own.’’

Puerta de la Luna…an imaginary place born from the culture of the towns and the natural environment of New Mexico. Glorieta has a sad duty as the mystical Días de Los Muertos approach. She has decided to bury her mother’s ashes and give her peace after her tragic death three years ago. The young girl, born of an American father and a Mexican mother, represents the best parts of both cultures, her ancestry is a beacon that leads her to connect with the nature and the people around her. Hamilton creates a beautiful character and a book that is ideal for the approaching celebrations of October, in a world that seems to have lost all sense of equality and tolerance.

‘’What if my skeleton comes out while I’m asleep? What if it walks around in the dark?’’

Hamilton succeeds in creating a novel that is equally tender and dark, in a colourful background of mystical tradition and an extremely harsh reality, set within the period of the Días de Los Muertos, one of the most famous and fascinating world celebrations, when the dead souls visit their relatives. The butterflies that grace the beautiful front cover of the book depict this belief. The traditions of the Espinosa family, the guardian angels, the talisman that will lead you to Heaven, the sins and confessions, the warmth and bonding of a family that is hard and persistent, almost cruel at times. All aspects of the centuries-old, rich Mexican tradition.

Magdalena’s death has cast a heavy shadow over the entire community. Hamilton makes a special reference to depression and the misconceptions associated with it. The oldest woman of the family cannot comprehend it and goes on talking about ‘’unforgivable sins’’ and ‘’the fires of Hell’’. The knowledge of psychological conditions is hard to be attained when unemployment and uncertainty rule. When danger coming from lack of reason lives among the citizens. The sensitive issues of immigration and blind persecution are discreetly but effectively touched. Racism is also a central theme. The minority of the ‘’faithful Christians’’ of certain parts in the Southern states hate every tradition that isn’t ‘’theirs’’, the epitome of new racism, the ones who act like the best representatives of fascism and the evil notion of white supremacy. However, don’t come into this book thinking that it is an endless gloom and doom. Far from it. There are so many beautiful moments, full of warmth and togetherness. I loved the description of the custom of the blessing of animals in the day commemorating Saint Francis of Assisi, a Catholic tradition still held in many parts of Italy and Spain. I adored the references to the one and only Frank Sinatra.

The characters are excellently drawn. You’ll love or hate them but you’ll be equally interested in all of them. Glorieta is such a gem! Determined, braved, kind, intelligent. Angus is such a cute, gentle soul. Francis is a beautiful character. A brave man of principles and with a firm sense of justice and equality. A man who wants to fight a regime that punishes acts of mercy towards children and helpless women. To stand up to a state that says ‘’our children are better than your children.’’ Now, Glorieta’s father is the exact opposite. A rather weak person that didn’t lose time to remarry after his wife’s tragic death. He is one of those who refuse to face the problem using the same old excuse of ‘’but I am only one person!’’ Yeah, mate, if more people thought like that, we would still be hanging people. Lilith is the typical spoiled teenager. It is easy to hate her very soul but in truth, she is a troubled, wounded child full of bitterness because of the way she has been brought up.

This is a beautiful novel, direct and honest, at times painful and terrifying. Will it be too difficult for teenagers? Perhaps, it doesn’t matter. Difficult suits them. Children should be taught acceptance, tolerance, togetherness. Literature is there to help them because their parents are often elsewhere occupied…My profession has taught me this over the years and it is a sad realization but one that applies to a significant minority. How can the world survive the cruelty of children being taken away because of racist, fundamentalist laws? No excuse of so-called security can justify this. Yeah, sure, I mean, let us create the concentration camps of the 21st century…Fortunately, History will remember the so-called ‘’leader’’ of today as she remembers Hitler and Stalin. The question is what happens until then? What happens now? I am sure the quote below encloses the very essence of the problem…

‘’Their lives don’t matter to people who haven’t listened to their stories.’’

Many thanks to Skyhorse Publishing and NetGalley for the ARC in exchange for an honest review.