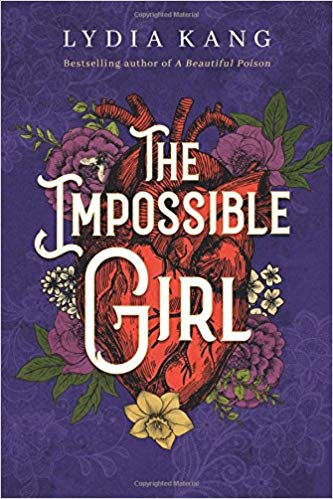 “The impossible girl with two hearts.”

One of the most controversial, grim and fascinating aspects of the Victorian era was the exhumation and selling of corpses for medical purposes. The advancing need for therapies over a multitude of ailments made the demand of knowledge of the human body and the way it fights against disease made these criminal actions flourish, the perpetrators earned a small fortune. I’ve always been drawn to novels dedicated to this subject and The Impossible Girl won me over with the New York setting, the curiosities, the promise of a multidimensional female protagonist. There was one more reason I wanted to read Kang’s novel. One of my all-time favourite books is The Dress Lodger by Sheri Holman, a story of a young prostitute in London during the Victorian era and her baby who was born with the heart out of his chest. If you haven’t read it, you must but be warned, it is quite a dark read. The Impossible Girl proved to be very different, though. It is not perfect but it is well-written, atmospheric and a very engaging combination of Historical Fiction and Mystery.

New York, 1850. Cora is a resurrectionist, a woman in a man’s profession. She has to disguise herself in order to have a future in this enterprise and support herself and the parasites who live with her. This isn’t Cora’s sole peculiar characteristic. Cora was born with two hearts and must defend herself from a scum who wants to create a museum of “curiosities”, one of the most pervasive notions in History, so “fashionable” during the Victorian era. Her path is crossed with Theodore Flint’s, a strange young man (their first meeting is absolutely perfect, by the way) and her troubles have no end….

“The poor died in such dreadfully ordinary ways.”

Unusual Medicine is successfully combined with a number of important issues that troubled the Victorian societies. Many of these problems continue to trouble us today, in our advanced era. The stealing of bodies for profit became the means for the advance of anatomy and the expansion of the knowledge of the mechanisms used by the human body. However, this doesn’t dispute the fact that it was a crime. Cora may use a million excuses but the result is the same. The motive is money. Kang addresses the issue and demonstrates that the boundary that separates the need for scientific research and the disrespect towards the body of a deceased human beingthat is nonexistent. And this isn’t the only wound of the society of The Impossible Girl.

The “museums” of “curiosities” are known to all of us through books, films, TV series. The Bearded Ladies, the Incredibly Strong Man, the Mermaid, the Two-Headed Boys etc. In this novel, the museum creates an environment that resembles death in life and exhibits people who aren’t creations of tricks, make-up and illusions. These are human beings with strange medical ailments. As if this isn’t enough, there is a killer who targets these unfortunate souls and Cora is among the candidates. Kang also comments on the illegal bet, another plague of the time. This environment becomes even more claustrophobic and threatening within a society, a city that changes. A country that needs to change. New York is a city blessed with diversity, a beehive of beliefs, customs and vigorous commerce but the society Kang creates is anything but accepting. The islands hide more than they let show, they breed mystery and danger, contradictions, inequality, injustice. Despite her considerable status, Cora is frowned upon because she is a woman, a creature everyone thinks ripe to fall into the hands of any man, and because she is of mixed heritage. She may mingle with the upper society but she isn’t one of them. And then, there is Dr Blackwell, a brilliant doctor who must fight against prejudices because she is a woman….

Kang creates a faithful Victorian atmosphere and excels in nightly scenes that are crucial to the story. It is properly gritty, dark and ambiguous and I was able to picture the streets, the market, the graveyard with ease. However, there were a couple of problems, in my opinion. The dialogue is suffering a bit, at times, sounding a little more contemporary than it should. In addition, there was a significant portion of repetition over the same issues, not wholly bothersome but a bit tiring at times. It distracted me from the scenery, the background of the story. The way I see it, the novel could have been 50-60 pages shorter.

“Not every woman needs a man to take care of her.”

Cora is a thoroughly engaging character. A strong, determined, complex woman. However, some of her desicions were highly questionable given the way her character was initially constructed but probably sentiment and desperation guide us to wholly unwise choices. Flint is a difficult character, as he should be. A dubious, enigmatic but charismatic man. Now, Leah is the main reason I didn’t fully enjoy the novel. she is immensely irritating, absolutely stupid and I have no tolerance towards idiots. An idiot who thinks she has the right to dictate and order. It is Leah who has the worst dialogue parts in the book and significantly lowered the overall quality of the story. She is easily one of the most disgusting creatures I’ve ever met in a novel.Because of Leah’s dreadful presence, one star flew away with her and her clanging pots. Also, her role was too predictable.Thus, the 4-star raring. And don’t even get me started on Alexander’s character….

Kang’s The Impossible Girl isn’t just your average Historical Fiction/Mystery novel that have (fortunately) become so popular lately. She has taken the best of these worlds and, despite the few issues, she writes about difficult themes that arw executed with elegance and sensitivity. The result is atmospheric, beautiful writing with the right amounts of sassy and spicy without becoming disrespectful.

“There are murmurs that they are coming for me. My body goes to God one way or another; I know this now. Have at it, you beasts. You are the ones rotting from within, not I. Not anymore.”

Many thanks to Lake Union Publishing and NetGalley for the ARC in exchange for an honest review.