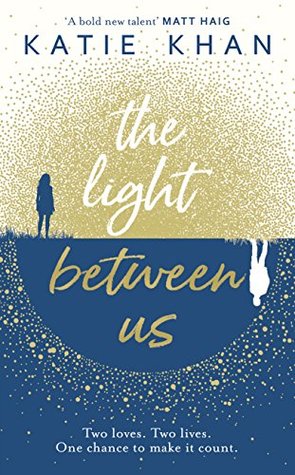 Title: The Light Between Us

‘’The planets were moving towards each other in the night sky when Isaac and Thea first met.’’

Yes, this is a wonderful combination of meaningful science-fiction and a charming relationship between two bright scholars. Yes, I enjoyed it immensely. Don’t worry, no aliens abducted me:) It is just that Khan’s writing is absolutely brilliant.

Thea and Isaac meet as undergraduate students in a lovely evening when a magnificent natural phenomenon takes place in all its glory. A few years later, Isaac is a gifted archivist and Thea tries to prove that time travel is possible. In doing so, her greatest battle is against the dusty minds of her supervisors who a) are unable to shake those bloody cobwebs off their minds, and b) are unwilling to accept that a young woman is clearly a million times more intelligent than them. Thea carries out experiment after experiment with the aid of her faithful friends but something goes horribly wrong. Isaac returns to help and Thea has to find where she stands and fights on two fronts.

‘’Most friends call to say hello. But you got in touch to say goodbye.’’

Khan has managed to create a balance between the scientific part of the story- the main focus of the novel- and the relationship between Thea and Isaac. Understanding their feelings is as hard as proving that time travel exists and the evolution of the story is satisfactory on both levels. Naturally, being me, I paid more attention to Thea’s project that her sentimental aspirations but Isaac is such a kind, warm soul that you cannot help wanting these two to simply understand each other. Properly. Thea’s past is not without its dark spots and Isaac comes from a Jewish family of survivors. In other news, I have to tell you that I have no problem at all with love at first sight. It exists, I can attest to that. It is rare, too rare but it exists.

Don’t worry about the technicalities and the terminology of the subject matter. It may appear confusing, initially, but if you follow the story closely and let your mind contemplate the possibility of multiple universes and the non-existent limits of time, you will be able to enjoy the novel. Because Khan’s writing is very coherent and well-constructed, not dry, not sentimental. There are beautiful nightly descriptions, the haunting environment of the moors and the unique atmosphere of London where History is tightly embraced with the rhythms of an ultra-modern metropolis are exceptionally depicted. There is an elegant competition between science and philosophy throughout the story, evident in the interactions between Thea and Isaac. The idea of the parallel worlds, of being able to exist in different universes, living different lives is so fascinating, taking the doppelganger concept a lot further than the common legend and the story beyond the traditional time-travel notion.  I also appreciated the fact that Khan didn’t play the tarnished card of Science Vs Religion. It was refreshing and she succeeded in not offending a significant part of the readership, which is more that can be said for other writers and reviewers.

I wouldn’t classify it is a sci-fi novel and it is a million years away from being a romance. No need for labels. It is a story that defies genres by incorporating different elements in an effective way, creating a very interesting novel with clever, contemporary dialogue and vivid characters.

‘’…all time-travel discussion turn to Hitler sooner or later.’’

Do we have the right to change the past? In the oldest question since 1945, would we kill baby Hitler if we were given the opportunity? Each one of us has their own ethical codes. I know I would exterminate the little Satan. Without mercy…