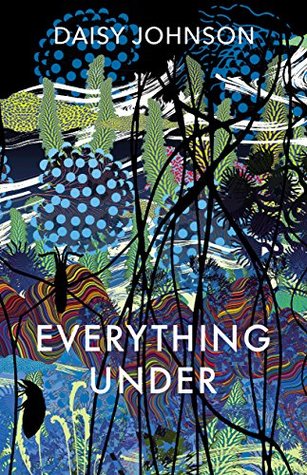 ‘’The places we are born come back.’’

Sometimes, when we have the chance to read the debut work of certain writers, we know that they are destined for great things from the very first pages. Lately, this has happened very frequently with incredibly talented young women who have created wonders. Jen Campbell, Hannah Kent, Sarah Perry, Kirsty Logan and Daisy Johnson. As soon as I finished her painfully beautiful short stories collection Fen, I knew. I just knew. And now her debut novel Everything Under is longlisted for the Man Booker Prize. But it doesn’t matter in the slightest. Prizes or not, this novel is an experience one cannot easily forget.

It is extremely hard to summarize the story in Everything Under. We go back and forth in time, mainly following Gretel who has been estranged from her mother for years. She wants to find her and comes in contact with the people who influenced Sarah’s life one way or another, trying to understand the motives for her behaviour, trying to discover the secrets Sarah never entrusted to her. The key lies to a character named Marcus who is at the centre of the unfolding events. If this sounds vague to you, you’re right to think so because to say anything more is strictly out of bounds.

‘’What would you say about yourself if you were going to die right at this moment?’’

Johnson creates a unique tale, channeling an ancient Greek tragedy, in a voice that is almost unbearable raw at times. Full of symbolism, it is a novel that defies genres and labels. At the heart of the story is the relationship between mothers and daughters. A very particular, very difficult relationship, a bond that is unbreakable, a bond that, more often than not, goes horribly wrong, especially with a mother like Sarah. It is an exploration of a highly problematic childhood, a time of threat, of the moments when the roles of the mother and the child are reversed. The lack of clarity is central to the development of the story. Told in 1st person through Gretel and in 3rd person through Marcus, words become jumbled, conveying cryptic messages. As Sarah is struggling with dementia, there is an extreme confusion of words and intentions and communication is lacking. It is not accidental that Gretel is a lexicographer working on a dictionary and that she and her mother had invented a language of their own. There is also a focus on riddles, often without any provided answers.

A trope that was done to perfection in Johnson’s Fen was the use of folklore, legends, and symbols. This is also present here and elevates the novel. Most of the action takes place in a boat on the river. A boat that can go nowhere since its engine is broken. I saw water as a metaphor for fluidity. Fluidity of gender and identity, of intentions and desires. The foliage hides unspeakable secrets and complex feelings. Even Gretel’s name is symbolic, the name of a child who tried to find her way, a child of a dark fairytale. And in Everything Under, darkness is everywhere. Its personification the Bonak, a water monster that brings threat and fear. There is a constant foreboding feeling that comes from the presence of a monster that damages and violates the soul of the characters,

Johnson weaves a tale that is impeccably rich. Piece after piece of the puzzle is discovered under layers of unspoken words and untold stories. For what else can our past be other than stories worthy to be told. We often say that one has to read a book in order to understand it. This phrase finds its true meaning in Everything Under. Noone can explain the feelings it causes to you, you have to experience it to realise its impact.

Is it wrong that even though I haven’t read (yet) the other books longlisted for the Booker, I want, NEED  this to win?

‘’There are more beginnings that there are ends to contain them.’’

Many thanks to Penguin Randon House UK and NetGalley for the ARC in exchange for an honest review.