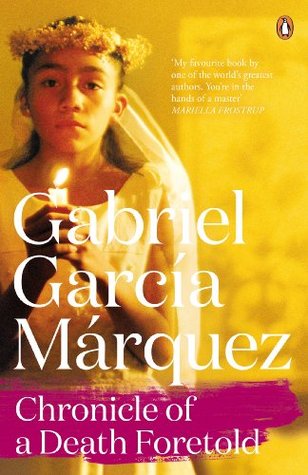 Title: Chronicle of a Death Foretold

‘’There had never been a death more foretold.’’

Santiago is murdered in the market of a Colombian town. The perpetrators are two brothers. His crime? The supposed defilement of their sister, whose marriage to a young man was broken because she wasn’t a virgin. Márquez does something extraordinary here. He creates one of his finest works, a crime mystery where the question isn’t who or what but why. Why did everything happen in such a way? Why do people have to resort to such actions? Why are we worse than the wildest animals? Márquez is concerned with human nature and the origin of truth and lies, In nonlinear narrative, written in first-person account, based on real-life events, Márquez creates a masterpiece whose title entered our everyday speech, whose inevitable violence still shocks us.

‘’Lowlifes’’ {..} shitty animals that can’t do anything that isn’t something awful.’’

When I first read this novella, some 10-odd years ago, I was studying in university and a colleague asked me why on Earth would I ever read a book whose outcome is known beforehand. There is an idiot in every corner and Márquez seemed to know that well. The portraits of the town residents couldn’t have been darker. They condemn Santiago because his origins aren’t the same as their own. He is an Other, therefore he is guilty without the benefit of doubt. Does this ring a bell? Everybody knows what is to come but no one warns him. The police do nothing, the priest forgets the most fundamental of Christ’s teaching and does nothing. When the mob condemns you, you don’t stand a chance. Márquez’s contempt and disgust are evident throughout the novella.

Márquez also touches on the themes of gender equality and ‘’purity’’. Santiago isn’t painted in favourable colours, his contempt and violence towards women are often mentioned. Angela is a rather controversial character too. You cannot take a solemn vow whether she speaks the truth or not, she is fickle and empty-headed and as much of a tragic character like Santiago. Was she raped? Was she in love with an other man? These are the actual mysteries of the story.

‘’I saw the knives in the light from the street lamps and it looked to me that they were dripping blood.’’

Márquez is the writer who paved the way for Magical Realism, incorporating its elements to each story in a subtle, poetic way, making the narration flow without turning into Fantasy. This became a common feature in Latin American Literature and quite a few writers tried to mimic him with poor results. In Chronicle of a Death Foretold, the omens acquire an almost Biblical significance. The weather, the animals- primarily dogs- the prophetic dreams bring to mind the fables of the signs that precede a catastrophe. Think of the omens described in Shakespeare’s Julius Caesar, in the night before the vile murder took place.

Every book by Márquez requires patience, dedication and a close attention to the story in order to fully understand the wealth and magic of his writing. Márquez is a Latin American Dostoevsky, a writer that should be required reading if we want teenagers to ever become accomplished readers.

‘’Give me a prejudice and I will move the world.’’