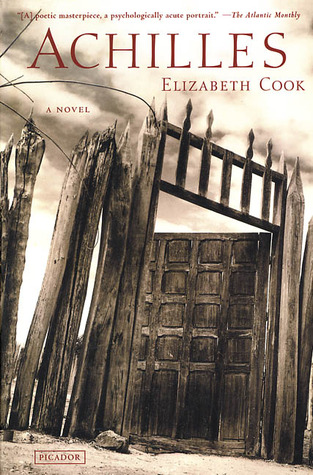 ”We honoured you like a god while you were alive. No one could match you. Now that you’re dead we still speak of you as one who will never be surpassed.”

Achilles. A name loaded with myths and History, a man who became a legend. Fictional or not, Achilles became the first hero- or anti-hero, in my opinion- a man admired and worshipped by Alexander the Great, the greatest of men, whom legend wants to sleep with Homer’s Iliad under his pillow. Achilles. A mortal, born of a sea goddess, and as ferocious and unpredictable as the dwelling of his mother. A man worthy of love and hate, admiration and fear. Brought down by a coward as a punishment for his terrible hubris. He has fallen victim to many a writer who tried to project their views on him, turning him into a monster or a romantic hero. Even Shakespeare got him wrong in his horrible Troilus and Cressida. (Sorry, Will…) Many productions butchered him to pieces, without mercy. This work by Elizabeth Cook is the only one that can find itself side by side with Homer’s epic of epics, painting an image of Achilles that does full justice to his visceral, contradictory character.

Achilles and Agamemnon by Gottlieb Schick (1801) via Wikipedia

Odysseus’ s offers to the dead souls in Hades aim in helping him find his way home as dictated by Circe. One of those that respond is Achilles, shocked and relieved to see his friend still alive. However, he is displeased with Odysseus’ s elegy on his name. He has no illusions, the king of the Myrmidons sees everything clear now that he dwells in the Underworld and he retreats in his shadow home. This is the beginning of his story, told by Cook in exquisite writing, in an elegy that is neither a poem nor a novel but a passage to an era when valour and violence walked hand in hand.

Triumph of Achilles in Corfu Achilleion

Cook forgets nothing. Every famous moment associated with Achilles is here, told in vivid, haunting details. His anger for the trap set by Agamemnon with Iphigenia as the victim of a mad war still burns in his dead heart. We gain insight into the characters of Peleus and Thetis with their erotic tour-de-force and of Chiron, the Centaur who shaped Achilles ‘s mentality. Deidamia, his female lover and mother of Neoptolemus, the noble Hector, the abominable Agamemnon, Helen, Cassandra, the tragic Priam, the disgusting Paris, the cunning Odysseus, the heroic Penthesilea, the doomed Polyxena, Briseis and Patroclus, the gods and goddesses who dictate the fate of the heroes parade before our eyes in a tragic performance, echoing all the strengths and weaknesses of the human nature.

The legendary moments are many, exquisitely narrated. There’s a glorious scene of Achilles’s grief for Patroclus, expressed against the River Scamander, the symbol of Troy. The dwell between him and Hector is always harrowing to read, especially if you’ve always sided with the Trojans, like I have. The meeting between Achilles and Priam is one of the saddest, most tragic moments in Literature. Thetis’s lament over the loss of her son is a raw, nightmarish scene.

”She thinks, ‘I am the loneliest person on earth.”

Then, Crook does something extremely powerful. Following Achilles’ s death, Helen becomes the narrator. The dark scenes of the fall of Troy are seen through her eyes, as she contemplates what would have happened if Achilles had been her husband (even though he never claimed her, safely hidden in the island of Skyros), the loss of Hector, the only man she appreciated, the cowardly nature of Paris, the monster that was Theseus. The last word belongs to John Keats and his musings on mortality, vanity and the often meagre significance of our existence.

Now, time for a rant. There are certain traces of implied rape in the story. Obviously. If one is familiar with the tale of the Trojan War (and I mean The Iliad, not the atrocious Hollywood films and TV productions that constantly violate myths and History), then the version of the encounter between Achilles and Penthesilea shouldn’t come as a surprise. The fact that this event was added to the Trojan cycle during late antiquity lends little credit to whether it took place or not. Homer mentions nothing related to supposed necrophilia. Anyway, if one cannot handle it, it’s fine and understandable. However, criticizing Cook for including innuendos in this work shows frightful ignorance, extremely poor perception and a vision that would be conservative even for the 17th century Puritans. Why bother with a war epic, then? Do these readers believe those men fought with flowers and savoir vivre? Well, there’s Hallmark channel to feast their sensitive hearts. We need to understand that Historical Fiction cannot be judged according to modern values but based on the reality of the particular era.

I will break my personal rule and I will ask you not to pay any attention to the negative reviews on Achilles. Some people need to do some basic research before they write. After all, the articles in the Guardian, the Times and the numerous literary awards speak for themselves. We won’t find a more rounded, mature, free from horrible YA phantasies portrait of the man who shaped the Hero’s image and archetype for centuries, a man who still fascinates and terrifies us.

…and repeat after me, Achilles was NOT alive when Troy fell….

”Two destinies, Thetis said. You can choose. Stay in the fight and be known-for ever- as the greatest warrior on earth, and your life will be short as the beat of that wing.”