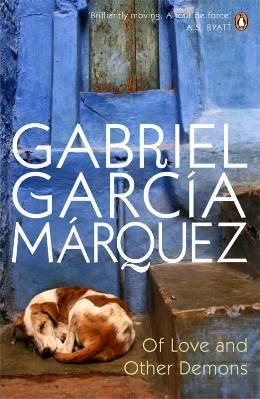 Title: Of Love and Other Demons

‘’Ideas do not belong to anyone {…} They fly around up there like the angels.’’

Neither Colombia nor Gabriel García Márquez need any lengthy introduction. One of the most fascinating countries of our planet, beautiful, mystical, haunting. A land of tales, magic, and lively people. A writer who is rightfully considered one of the finest in the history of Literature, a magician of words, an artist who elevated the novella genre and became one of the pioneers of Magical Realism. Of Love and Other Demons is my favourite work by Márquez and the one which initiated me into the beauty of his writing and started my fascination with Colombia. This was the moment to revisit it one more time…

A wild dog attacks the people in the market of Cartagena. All those who were bitten die of rabies with the exception of Sierva Maria, the daughter of the Marquis, who shows no sign of decline. Soon, strange incidents begin to take place in the city, attributed to the girl. When the plague starts, the Church takes an interest and begins to investigate whether Maria is actually possessed by demons. Cayetano, a gifted young priest, is assigned to her case and he comes to understand that the Devil is actually pretty weak when compared to two great forces: the madness of the human beings and Love. A kind of love that must survive the attack of the demons who are very much alive, walking on this miserable earth…

‘’Furthermore, a pig spoke and a goat gave birth to triplets.’’

Márquez presents a society that is steeped in superstition and sees evil and signs of doom everywhere. The disease of rabies has always been loaded with myths and otherworldly references. As it is transmitted by animal bites,  it has been associated with creatures from all fantasy spectrums, from werewolves and vampires to the Devil himself. Furthermore, the psychological implications of the virus and the way in which victims were dying helped in elevating rabies to the sphere of the metaphysical and the unexplainable. Márquez used these myths to perfection in this novella. The atmosphere of magic and exoticism is further emphasized by the setting of the story. The port is ripe with commerce, slavery is still going strong. These factors comprise a multicultural society, an amalgam of ethnicities, languages, religions and common beliefs. Márquez uses the side effects of class discrimination and the variety of tradition to demonstrate the power of convictions on the thoughts and the life of the people. Religion can be seen either as a refuge or as an excuse to exert power on the helpless. A Bishop who would like to show how open-minded he is when he only aims at imposing his beliefs on everyone. An Abbess that cannot see in front of her nose, serving the malicious fundamentalism of the monasteries. And a priest that tries to fight against madness to save a girl who moves between two worlds, a presence full of secrets and contradictions. What is she? What truly happened?

Through sensuality, folklore and raw realism, Márquez creates a colourful tapestry of themes and beliefs, with a vivid cast of characters. Maria and Cayetano are two protagonists that left their mark on Márquez’s work, in a story that is visceral and beautiful, powerful and tragic. A fable, an exotic allegory that shows how human beings can do the worst evil imaginable. Not any demon, not any devil but men. Men that destroy all that is pure and good and strange by condemning it as unnatural and vile…

‘’I have always believed He attributes more importance to love than to faith.’’