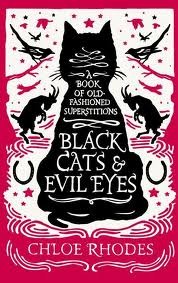 ‘’No matter how certainly we know that the spirits of the damned aren’t lurking under ladders hoping that we might sneeze at just the right moment for them to take possession of our bodies, something makes us change our path and look around for someone to say ‘’Bless you’’.

*Ignore the horrible syntax and punctuation of the quote above. This is the least of the problems of this book…*

I’ve always found the superstitions around the world such a fascinating subject. Learning about customs and traditions related to the beliefs, fears, and expectations of (mainly) the people of the past helps us understand some of the things that make us such complex, unique (and difficult) creatures. Is it not telling that no matter how educated we may be, no matter whether we follow a particular religious belief or not, no matter how open-minded we may believe ourselves to be, there are always precautionary rituals observed by most of us. And when I say ‘’most’’, I mean all of us. Anyone who says differently is a liar. Now, this books contains entries on superstitions derived mainly from the Anglo-Saxon tradition but we find a number of world traditions as well. Unfortunately, the writer’s attitude destroyed what could have been an excellent concept.

My mother still has the habit of picking up pennies (which just drives me mad but don’t mind me…). She keeps them inside a special piggy bank and never spends them. My grandma used to find pins everywhere and they used to be her first method of finding a lost item, following a rather obscure (to my knowledge) Mediterranean custom. However, you know what? It worked somehow. Every single time. I’ve seen it happen so I have come to believe- to a certain extent- that there are certain ‘’superstitions’’ that can miraculously work. Beliefs about life, birth, death, love, hate. The moon, the sea, the clocks that stop ticking, the owls and the ravens, every aspect of our lives is related to actions and their consequences. Why shouldn’t nature have its own mind on certain things? Whether these are superstitions or not is for each one of us to decide.

And now, the problems I faced with this book. Well, where to begin? First of all, repetition. This has already been mentioned in the majority of the reviews on Goodreads. Superstitions that could have been merged into one, become five or six different entries. As a result, the writer repeats sentences and observations over and over again, to the point where I felt our intelligence was being insulted. Seriously. Another problem is that she projects her own assumptions as common knowledge or common behaviour. Other times, the supposed information she provides is actually common knowledge. I mean, make up your mind…

I think that the writer’s tone was unnecessarily critical towards the superstitions (or what I prefer to call ‘’traditions’’) derived from religious or folk beliefs. Not practicing them is absolutely fine. I don’t practice or even believe in most of them. However, irony and ill-will criticism irritate me to the high heavens, I’m sorry to say. You want to call yourself a writer? By all means, do. Respect your subject and don’t be condescending because, in the end, you disrespect yourself. In my opinion, every belief should be researched within the context of the era and viewed critically or not but respect is crucial. Trying to appear smart or ‘’progressive’’ as a writer doesn’t interest me as a reader. And a little more respect towards the importance of Ancient Greece, Rome and Egypt wouldn’t hurt. I think the writer should take some lessons on respect towards world cultures, beliefs, and religions. In fact, she should take a few lessons on History, in general.

This brings me to the major problem of the book that is already mentioned in two fine reviews on Goodreads. The amount of historical inaccuracies is unbelievable. I mean, dear friends, it is worse than any period drama produced in Hollywood. It would take us pages upon pages to name them all. These are just a tiny part of the most characteristic mistakes the writer and the editor didn’t bother to verify and correct. Who cares about accuracy, right?

2. Women were burned in England during the 1600s under the pretext of Witchcraft. The burning of women condemned for treason continued for many years. There was even a solitary case when a woman was burnt in the early 18th century for committing adultery. Do your research, dear writer! Even a simple Google search is enough…

3. The word ‘’Yule’’ does NOT come from the Old English word ġéol. It is merely a modern English representation of the word that is supposedly derived from the Old Germanic (Gothic to be exact) word jiuleis or the Nordic versions jól and jul, depending on the region. How could a custom of the Germanic people have an Old English name? Even Vikings are more historically accurate.

4. Certain customs attributed to the Russians are actually derived from Balkan traditions, mainly practiced in Serbia and Bulgaria.

5. The belief of not wearing new clothes to a funeral is in all probability Georgian/Victorian (depending on the sources) and not African- American.

So, this is rather problematic. A shame, in my opinion, because the concept is exciting but the writer’s lack of knowledge on how to do a basic research tore down the whole effort. I had read a book written by Rhodes before without having any problems. Probably, because History had nothing to do with the subject. Needless to say, I won’t read the rest of her work and I am sorry to say that I do not recommend this one at all. There are other books on the same subject by writers who actually respect their readers, the material, and their own effort.

So, in the immortal words of our favourite high-functioning sociopath….