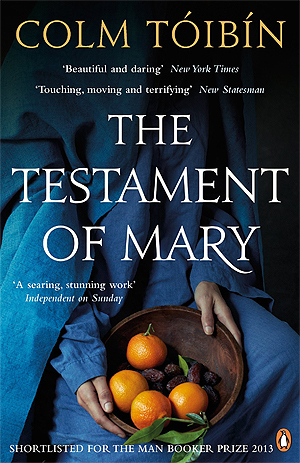 Title: The Testament of Mary

‘’I have forgotten how to smile. I have no further need for smiling.’’

I’m not sure how this review is going to come through. This is a subject matter very close to my heart and a novel by one of my most beloved writers. Therefore, if you think this text is too emotional, I apologise in advance. The only thing I want to add is that any comments related to religion or the matter of Faith, in general, will be deleted at once. This will not be the space for religious debate. I have said before that each one’s faith and beliefs (or lack of both) is our own business, an extremely personal issue. We can discuss the novel’s technicalities to our heart’s content but any opinions on religion have nothing to do with Literature and our personal convictions concern no one. I cannot stress this enough. This is an amateurish attempt of mine to write a text that will attempt to explain why The Testament Of Mary is one of the most poignant, powerful novels I’ve ever read. Questions on particular religions or Atheism or whatnot do not interest me in the slightest and I don’t provide space for them. I am sorry if I sound blunt but this is my personal way to clear up some things before we get messy. Thank you for your understanding.

‘’Because the world is a place of silence, the sky at night when the birds have gone is a vast silent place. No words will make the slightest difference to the sky at night.’’

A few years after the events of that nightmarish week, Mary is visited by two men who wish to write about everything that happened. Mary doesn’t want to talk to them or to anyone. They can’t understand. How could they possibly understand what it is to watch your only child dying in unthinkable agony while his tormentors are either watching idly or casting dice for His clothes nearby? How could they understand the resilience she had to unearth in order not to rush and tear the eyes of the murderers with Her bare hands? But they aren’t interested in what She thinks or how She feels, they just want their opinions verified. Mary starts speaking to us instead, going back to the last few months before the death of Her child, before the world changed forever. Except She doesn’t care, the son is dead. Needlessly, absurdly, terrifyingly. It is the world, the people that took Him away. How can a mother forgive even if she understands, even if she knows? Tóibín creates a masterpiece around the thoughts and the moving characterization of one of the most beloved religious figures for millions of people.

I didn’t expect anything less from one of the greatest of our times. The writing is phenomenal. The descriptive passages resemble the Biblical tone of the New Testament and the dialogue has a period feeling, especially when Pilate addresses the crows. (On a lighter note, before things get unbearably heavy and dark, I feel the need to add that Pilate’s interaction with the mob brought to my mind the excellent Andrew Lloyd Webber – Tim Rice Rock Opera Jesus Christ Superstar. ‘’Trial Before Pilate / 39 Lashes’’ is one of the finest moments in the show, both the music and the libretto are outstanding.)  Mary’s words and thoughts are extremely carefully chosen and expressed and they retain a more contemporary, universal feeling. You can ‘’hear’’ a kind of solemnity, fierceness and, at the same time, a deep sense that everything is in vain. Mary herself is fierce, independent, determined. Full of a burning rage that turns endless sadness into wrath for the impossible injustice. In my opinion, sometimes, she’s also in denial because She knows all fears will prove true in the end…

‘’There are men shouting in the night.’’

The way Tóibín unfolds the story and develops events we all know extremely well is fascinating. The dark, foreboding hints of the horror that is to follow are everywhere and the scenery is very powerful. Silence, darkness, incorporeal voices in the middle of the night. An intense feeling of isolation surrounds Mary and Jesus, even though He’s followed by a multitude of people, foreshadowing that loss and torment are horrifyingly lonely experiences. It is quite clear that Mary feels threatened by friends and enemies alike. The writer inserts a very interesting, mysterious figure called the Strangler. He seems to follow them everywhere. He commits no crime but he stands there as a symbol of danger and death. I imagined him as a metaphor for Satan.

Now, there are many moments when Tóibín lets the story come into its own. He mixes up some of the events of the New Testament. For instance, the Wedding at Cana takes place before the Raising of Lazarus but unless one is a die-hard purist (in which case they’ll abandon the novel before they turn the third page) it makes no difference at all. Now, the Raising of Lazarus is always a moment of reference in any production of the life of Jesus and Tóibín creates an extraordinary sequence. I found his characterization of Lazarus extremely powerful and moving. Lazarus is said to be the one who never smiled again due to the horrors he had witnessed during his four days in the Otherworld and Tóibín remains true to this tradition. He also has Mary contemplating on the gods of the past, implying that there may have been peace if the slight possibility of the coexistence of all religions had become reality. If it weren’t for the humans, the fanatics who use religion as a pretext for relentless violence, to justify their own unbearable narrow-mindedness. We still see this every day. Countries are governed by such people, no need to name names, right?

The tension is masterfully built during the final moments. As we view the incidents exclusively through Mary’s eyes, we sense the impending doom as she is the last to know about the arrest of Jesus. At the hour of need, Tóibín writes about loneliness. Cowards slip away, denying any aid or consolation. Never trust relatives, I always say. They are the first to shut the door on your face….Every talented writer is an excellent psychologist, in my opinion. Here, he succeeds in projecting the psychology of the brainless crowd who lust for blood. The violence of the mob, the moment when every human being becomes more ferocious than any animal. Except that animals have a sense of justice. The crowds have nothing. They know nothing and are led blindly. This has been our world’s History since the beginning of time.

‘’He was the boy I had given birth to and he was more defenseless now than he had been then.’’

The moment when Pilate presents Jesus to the mob was one of the most terrifying in the novel. Tóibín doesn’t choose to make use of cheap details or gore that would contaminate the emotional weight of the scene. It is the terror of an incomprehensible justice that is enough. The feeling of seeing a mother watching her child, beaten and humiliated, walking to an unjust, terrifying death, forced to carry the instrument of his execution. The scene of the Crucifixion is swiftly dealt with. Tóibín doesn’t need to resort to shocking theatrics. Blood and gore are for idiots.

How did this fail to win the Man Booker Prize in 2013 is beyond me. I haven’t read The Luminaries (I intend to do so soon) but I am more than certain that it can’t stand next to Tóibín’s talent. This is a story of unbearable loss, injustice, and survival through a thick silence of pain and death. It is a terrifying, yet tender, masterpiece and, in my opinion, his best work. For it is the greatest responsibility to reimagine Mary’s most tragic moments and bring forth such an excellent result. If nothing else, this is the story of a woman who experienced the most severe blow a parent can accept. It is not a matter of this faith or that but a story of the heart and the soul. One must be made of stone to remain indifferent…

These are two extremely interesting articles about The Testament of Mary: