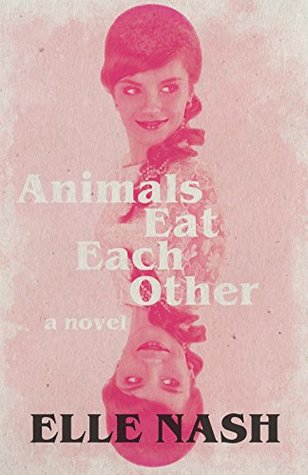 Title: Animals Eat Each Other

A young woman, in a rather unstable state in life, finds herself in the centre of an emotional whirlwind. 19 years old and undecided over her future choices, she meets an unusual couple, Matt and Frances. A weird relationship between the three begins soon and the nameless heroine is initiated in a situation that will go out of hand once the rule ‘’no string attached’’ is violated. She embarks on a journey of identity, obsession and haunted instincts. And if this novel by Elle Nash isn’t included in the best Literary Fiction of 2018, I will be very, very disappointed.

‘’I spent so much of my life doing what everybody asked me that I wasn’t even sure what I wanted anymore, if I wanted anything, if I had needs at all.’’

First of all, don’t be mistaken. This is as far from a (horrible) romance as you can get. As much as the subject matter may bring certain images in our minds, I can assure you that this is Literary Fiction. Twisted and different, written with quality and talent. The main theme that is brought forth through ‘’Lilith’s’’ eyes is acceptance. Self-knowledge. Or the struggle for it. Acceptance is everywhere as the young woman is constantly seeking validation through meaningless physical contact. Until she falls in love. It’s not accidental that we never learn her true name because she seemingly lacks any kind of self-definition except as a cauldron for others’ void needs. And she remains fully aware of it. She’s under no illusions throughout the story. Only when she allows herself to open up to her feelings does her mind blur. She is weakened and loses everything.

‘’There is a way people damage you, a way they’ll change the structure of your DNA, the way your brain is wired.’’

A downward spiral of obsession, drugs and sex begins. Everything stems from her desire for self-approval. What I found so interesting is the implication that sometimes, the more we try to distance ourselves from every emotional involvement, the more we try to gain self-assurance, the less independent we actually become. We fall into the trap of seeking the acceptance of others, in a weird oxymoron that ends up in humiliation and regret, This is the mud in which our narrator finds herself. And even though she fully recognises her mistakes, she keeps on repeating them in a vicious circle. Why? I think this is for the readers to decide. A very refreshing notion for the development of the story is the use of Religion (whether established or not) as a way to disclose the most secretive urges, to cover them up or kill them once and for all. This theme gives a dark mysticism in the narration. A raw, haunting sensuality. Satanism, Tarot, Underground Philosophy and Psychology make for a very dark, very particular read with Freudian influences. Are we actually born with a bombastic combination to create only to destroy and start all over again?

I found nothing pretentious in Animals Eat Each Other. Only an extreme honesty and a writer’s immense talent to accurately depict the animal we all hide inside. I firmly believe in this notion, even if it sounds pessimistic or nihilistic. This can be read as a modern Venus In Furs. A visceral Bildungsroman. Sharp, brave, powerful, imposing. However, I can see that this is not a novel for everyone. It is an extraordinary debut, ideal for the readers who ‘’enjoy’’ a more twisted and dark side of Literary Fiction. Just be warned that it may make you feel uncomfortable. Not because of any graphic descriptions. There are none, believe me. On the contrary, this novel should be taught in Creative Writing classes on how to write a realistic and powerful sex scene. Its difficulty centers around the fact that it poses questions whose answers lie deep inside us, in places we wouldn’t really want to bring into light…

‘’Pain is closer to love than indifference.’’