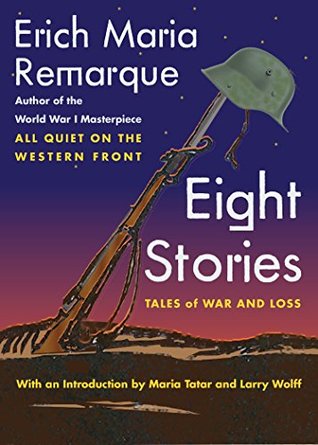 ‘’Only one cemetery for so many. Everywhere, in scores of places, lie the others. The white wooden crosses of the French, the black ones of the Germans.’’

With All Quiet on the Western Front, Erich Maria Remarque did the unthinkable. He made millions of readers understand and sympathise with a soldier of the Enemy, an enemy that brought Europe to its knees and caused bloodshed and chaos. The First World War was an unconceived nightmare, a notion beyond any comprehension. Remarque- a fervent fighter against Fascism- created Paul Bäumer, a character that embodies all the despair, the disillusion and, ultimately, the apathy in front of the inevitable outcome of a war that is the very definition of bedlam. Bäumer became a symbol for the despairing soldier who has no idea what he’s fighting for anymore and All Quiet on the Western Front became the pioneer of the anti-war novel, the cry of agony over a world that has gone utterly and irreversibly mad. This collection of eight stories inspired by the futility and madness of war and centered around the people’s perception of the conflict is a masterpiece on its own.

‘’And for the first time I understood that it was against men I was fighting.’’

The Enemy: A German soldier realises that he fights over falsehoods, against fellow human beings who are no different than him and his fallen comrades…

‘’It is the silence. The dreadful silence of Verdun. The silence after the battle. A silence without parallel in the world.’’

Silence: The eerie, haunting description of the silence over the battlefield, where young men have sacrificed their lives over ashes and terror.

‘’But they have left out one thing: Never again. That is missing.’’

Where Karl Had Fought: Sergeant Broeger returns to the battlefield, 10 years after the war has ended. Memories of the deaths of his comrades, of the town that is no longer there haunt him still…

‘’…children, as yet they do not know anything…’’

Josef’s Wife: The wife of a soldier who suffers from PTSD struggles to support her family and help her husband see the end of the darkness in his mind. A moving, beautiful story, my favourite in the collection.

‘’Bring me something pretty from Paris!’’

Annette’s Love Story: The story of a woman who realises the depth of her feelings when it’s too late. Here you will read one of the most tragically poetic passages about the life of the ones who have stayed behind, waiting…

‘’When the warden told them they were free, they did not believe it at first.’’

The Strange Fate of Johann Bartok: A fortunate (if one can use this word in such a context…) soldier passes through Hell only to be betrayed by the people closest to him. I felt an indescribable sadness as I was reading this story…

‘’Those were wonderful nights. The air was warm, with a strong scent of flowers, much stronger than by day.’’

On The Road: Two former soldiers become vagabonds, trying to find a new meaning in an empty life.

‘’In October, when the leaves were falling, the dying started.’’

I Dreamt Last Night: A devastating moment in a war hospital. A story difficult to classify, immensely beautiful, albeit tragic.

These stories are a tender, melancholic ode to the humanity that can be born in the midst and the aftermath of a terrible war. To the ones who fight without knowing why, who struggle to form a new life out of ruins and death. To those who stay behind, waiting for the loved ones in an agonizing maelstrom of their own. Yet, hope is present. Perseverance and the unbeatable instinct of survival guide the way, along with regret and guilt over the victims of a meaningless fight, over the ultimate demise of all that is humane and hopeful and kind. When you are dictated to kill a fellow human being because a tyrant chases his nightmarish moment of glory. A mournful cry over the history that will repeat itself a few years later…Can anything remotely human survive the blackest pages in the course of mankind? Through these stories, Remarque answers ‘’yes’’.

‘’I knew once more that beyond and above war and destruction there was something else, and that it would return again.’’

Many thanks to New York University Press and NetGalley for the ARC in exchange of an honest review.