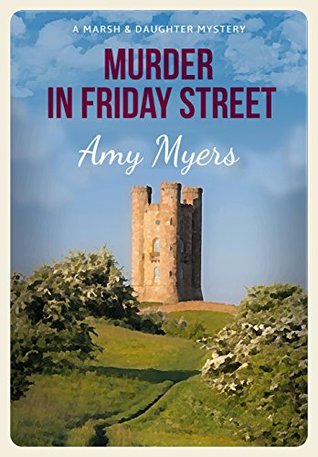 ‘’Friday Street likes to keep itself to itself.’’

I find that the beginning of summer is always an appropriate time to read a British Cozy Mystery. Now, my relationship with cozy mysteries has been stormier than the European affairs during the last few years. Once they became ‘’fashionable’’, they lost all credibility in my book. They became worse than the worst soap – opera and I intended to stay away from them once and for all. However, I saw this one on NetGalley and I was attracted by the cover and the title. Friday has some quite negative connotations in Britain and when I read the blurb, I was sold. I’m now happy to report that it was a successful choice.

Georgia and Peter, her father, occupy themselves with cold cases. Peter is a retired policeman and Georgia writes books based on their experiences in the field. A murder of a successful musician that took place 40 years ago is linked to a recent death, both of them connected to a haunting tune that is heard in the village when an injustice seeks resolution. Swinging ‘60s? Check! A father-daughter duo? Check! A village community with terrible secrets and legends along with its very own haunted tune? Check! What could go wrong? Fortunately, nothing went wrong and Murder in Friday Street managed to revive my comatose interest in British Cozy.

This is the 2nd book in the series but I didn’t notice it at all. What I did notice was how successfully depicted the atmosphere of the village was. A village that fights desperately to hide its secrets. ‘’We don’t talk about it, so it doesn’t exist.’’ That’s the logic. However, there is a piece of music that screams of malice and impending death and the very essence of this place is full of superstitions and mystery. Friday was the day when the convicted would start their journey to the execution, the way of the Gallows. In addition, Friday is considered unlucky and laden with misfortune and sadness. Take Good Friday for example. Therefore, despite the quaint scenery, there is something that still haunts the residents. A hideous crime and secrets that beg to come to surface.

Peter and Georgia are very sympathetic characters, I loved Georgia and I especially enjoyed the structure of her character. She doesn’t come across as a know-it-all, even though she has some moment of utter stubbornness. She does have her own secrets and wounds as does her father and this makes them all the more realistic and approachable. The mystery itself is very interesting and despite the significant number of suspects, each character is well developed. I never felt ‘’lost in the mystery’’.

I have a strange rule. I never grant more than 3 stars to a Cozy Mystery. This one was good enough to make me break my rule, so I guess this counts for something. I enjoyed it so much and I will definitely try to continue with the series. Amy Myers has done a wonderful job.

Many thanks to Endeavour Media and NetGalley for the ARC in exchange of an honest review.