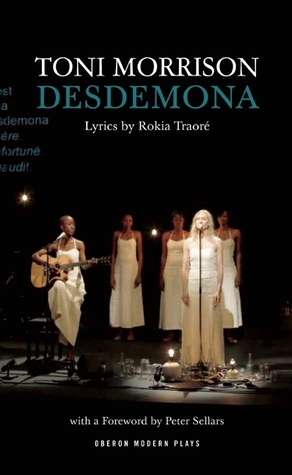 ‘’My name is Desdemona. The word, Desdemona, means misery. It means ill fated. It means doomed.’’

Othello is one of the most famous, most discussed and most problematic plays of the Bard.The questions it has raised through the centuries are endless. Why is Iago so evil? Why is Othello such an idiot? What was Desdemona’s motive in marrying him? Was it love? Was it an adolescent infatuation fed off stories of grandeur and glory? Was it an act of rebellion? Desdemona, like Juliet, chose her husband and didn’t succumb to the wishes of her family. In this play, Morrison attempts to give Desdemona a voice richer than her presence in Othello. She acquires the spot upon the front stage and we see the events through her eyes. Yet, I’m not certain Morrison succeeded in her aim. Or perhaps, I didn’t understand it. Whatever it was one thing is clear. Morrison isn’t Shakespeare…Not even close…

Desdemona speaks about her life before Othello, her upbringing by a cruel mother in a golden cage. Othello is given a role, narrating the stories that presumably won her heart but at the same time, they’re not really a token of his ‘’bravery’’ but of his cruelty. Emilia is also present as is Barbary, Desdemona’s mother’s maid, a role that is absent in Shakespeare’s play. And every single one of them accuses Desdemona of naivety, false modesty, of treating them all like barbarians or servants. I don’t think that this is correct or just. While Morrison does accomplish her goal in giving Desdemona a chance to speak about the terrifying injustice that was done to her, her message is turnt upside down by what I considered as vilifying intervals to the girl’s thoughts. I am a fervent supporter of the view that we should look upon at each play, each novel within the context of the time it was written, not using them to project our own political or social beliefs. This is my opinion. As is my opinion that while ambitious and potentially visionary, Morrison’s play falls frightfully short.

At times, the writing is beautiful. At others, it is unnatural, stilted, like a badly -mimicked Shakespearean monologue, adopted by an incompetent translator. I enjoyed the songs -at least, the lyrics- but I don’t see how they shed any new light to Desdemona’s course. I may sound strict but a) I dare claim that I know my Shakespeare well and b) Desdemona has always been a character I looked upon with softness and an unusual spirit of protection and I failed to see any justice done to her name in this play. At least, not in the extent I expected to. So, my expectations were high and the result left me cold. In my opinion, the Bard is better left alone sometimes because he requires tremendous chops to be dealt with and in this work, the skills were average, at best. However, the attempt was brave and poignant and many will be able to enjoy the result.Personally, it left me utterly indifferent. And disappointed…