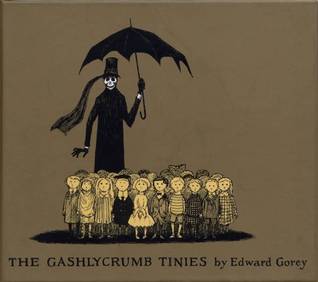 “A is for Amy who fell down the stairs.

….naturally, I would start with my name, right? Right?

I feel so bad saying how much I enjoyed this one….It’s Edward Gorey, people! One of the artists that defined the Gothic illustrating style as we know it today. Influenced with Victorian and Edwardian elements, this alphabet book is everything an alphabet book shouldn’t be (…and I am not making any sense…) because it’s morbid to the core. But I loved it. And I am a teacher. And what does this say for me? …Also, I am horrible…

This is an abecederian book written in 26 couplets. 26 tiny poems for 26 tinies who met an untimely demise in some quiet peculiar, bleak and utterly gothic ways. One was thrown out of a sleigh, another was smothered under a rug and a third one died of ennui. I know this would be a book that will be difficult to stomach for some readers but if we try and ignore the macabre of the situations, then the entertaining factor is right there. Plus, it’s Edward Gorey. One cannot write a review on any of his works. He is meant to be experienced, his artistic style, his particular way of writing, his uniqueness…Trust me, you won’t be disappointed…

”Y is for Yorick whose head was knocked in.”

….this Bard is everywhere….