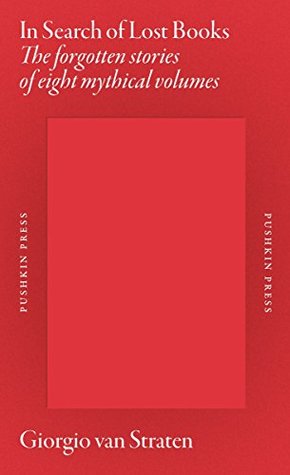 Title: In Search of Lost Books: The forgotten stories of eight mythical volumes

‘’Could it be the void itself which fascinates us, since it’s possible to fill it with the notion that what is missing might be something crucial, perfect, incomparable?’’

One of the most fascinating – and sometimes disappointing – ‘’what if’’ in the reading community has to do with the books that were once written but never saw the ‘’light’’ of publication. Books that were destroyed, lost, forgotten. The great tragedians wrote hundreds of plays and what actually survives of their work is a tiny minuscule portion.  Imagine the potential plays of Shakespeare that didn’t survive. How richer and, dare I say, more beautiful reading experiences would have been ours had those creations survived…

Now, in this extremely interesting and excellently written book, Giorgio Van Straten presents the adventure of 8 books by authors who have sealed the course of World Literature. Books that were written under special circumstances and were lost soon after. ‘’Lost’’ may not be the proper verb, though. Works by writers such as Gogol, Plath, Hemingway, Byron. A book is destroyed to protect a marriage, another is thrown away to salvage the reputation of an influential man. A lost suitcase containing the juvenalia of one of the greatest writers causes discord between a husband and a wife. A poet is a potential suspect for his wife’s lost unfinished manuscript, two books become one of the millions of victims of the Nazi nightmare. A Russian Divine Comedy never comes to fruition, a writer succumbs to alcohol and causes a devastating fire. Human feelings become the motive for destruction, unfortunate coincidences, secrets, fear of the past and of the future, the need for perfection, the uncertainty of success in a melancholic literary journey from Florence to London, from Paris to Russia and from beautiful British Columbia to Prague.

Van Straten writes in a very direct, elegantly conversational style and often refers to his personal sources and to the views of writers contemporary to each respective author. He comes across as an extremely professional researcher, dedicated and fully respectful of the work and the life of 8 writers who have given us masterpieces. How much more some of them had to offer but fell victims to life’s troubling whims….

Many thanks to Pushkin Press and NetGalley for the ARC in exchange of an honest review.