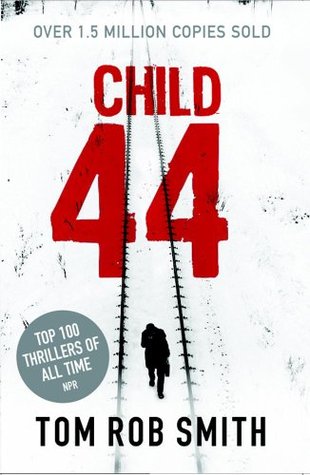 ‘’Brother, if you were a playing card what card would you be? Would you be an ace or a king, a spade or a heart?’’

What a month this has been so far… Gearing up the scheduled readings for the coming Holy Week and the much-needed Easter holidays, I’ve spent March with a number of strange, memorable books that proved to be a rather demanding company. I am not exaggerating in the slightest when I say that Child 44 was the finest, darkest, most emotionally draining reading experience. This isn’t merely a thriller or an excellent Historical Fiction novel. It is a deep dive to the rawest of emotions of the human soul. The fight to preserve and survive as opposed to the inclination of some to destroy all that is good and pure.

Before I continue, I must say that I will not engage in any discussion regarding political commentary or historical accuracy. I’m sure we’re all educated, open-minded readers that have studied our fair share of Fiction and Non-Fiction on the nightmare that was the Soviet Era. Each one of us has an opinion but we’re here to talk about books not international relations. Any relevant comments will be promptly deleted and dealt with.

And as a novel, Child 44 is brilliant, in my opinion. Leo is a high ranking officer of MGB but a personal quarrel with Vassili, another member of the State, leads him to forfeit the life he knew. His sole purpose becomes the discovery of the man who commits crimes beyond all reason. The murders and mutilations of children in the wintry forests across the country. Leo’s only ally is Raisa, his wife, while both are keeping secrets from each other. So, everything comes down to a race against time and people whose false ideals demand absolute silence and blind obedience.

‘’Doing nothing is no guarantee we won’t be arrested anyway- I’ve learnt that lesson.’’

The world of Child 44 is a living nightmare and, obviously, one has only to read the basics of Stalin’s reign of terror to feel that the descriptions are not just tangible. They are the Boschian History of a quite recent past. Tom Rob Smith writes without cheap sensationalism but with raw, razor-sharp language that is beautiful in its darkness. This is a time and place where anything can cause an arrest and anyone can be accused of treason. People are persecuted because their clients are Westerners. Others are persecuted on the basis of unheard prayers despite their age or sex. You pray therefore you want Stalin dead, off with you! You are guilty unless proven innocence. But if you’re proven innocent, someone hasn’t done their job right. You can’t be innocent but you can be an abomination that the State has to throw up in a society where there is no crime…

‘’Is that how you’re able to sleep at night, by blanking events from your mind?’’

Leo and Raisa are masterfully crafted characters. They are flawed but sympathetic. They are controversial and ambiguous, a couple equally strong, determined, secretive and honest. As honest as they can be given the era and the circumstances. Smith succeeded in creating protagonists that are the driving forces of the story. They are realistic, brave and intelligent without seeming fake. Even Vassili and the culprit are believable. They aren’t caricatures and they retain the reader’s interest. This is what makes the difference between a proper villain and a cardboard figure.

I cannot say anything about the storyline, obviously, but I can tell you that the development of the mystery, the twists and implications as well as the conclusion compose a novel that is a work of Art in its genre. The references to the hardships that people had to face on a daily basis, the fate of the accused, the small details about the fight of the Russian people against the Nazis make the narration even more vivid and enrich the historical background. I particularly appreciated the reference to the Night Witches, the legendary female pilots who became the terror of the Nazi monsters during the Second World War. If you don’t know their story, make sure to check it out.

I didn’t know that this was the first book in a series and although I loved it to the point of losing my stop twice during my commute to work and back, I don’t think I’ll read the second installment soon. I need Child 44 to sink in and I doubt its follow-up will stand up to its predecessor.

‘’They listened to her cries. But there was nothing unusual about this kind of grief and people did not watch for long.’’