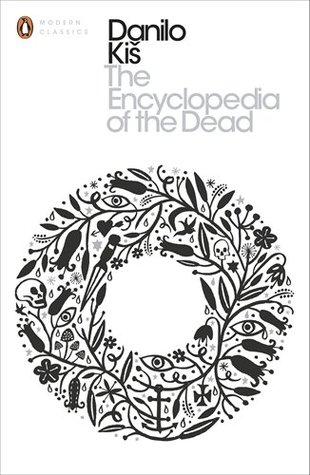 Title: The Encyclopedia of the Dead

‘’When a lie repeats for a long time, people begin to believe.’’

This collection is an ode to the values of Literature. An opportunity to contemplate, to feel, to reflect. A beautiful, haunting symphony composed of religion, philosophy, folklore, living History. A work that places the human being, naked and feeble as we are, at the heart of every story. Our fears, our fickleness, our virtues and vices, our ability to create only to destroy. Our desire to rebuild and then tear down everything and everyone. Our search for knowledge and love to an unknown end…These are some of the most beautiful, poignant stories you’ll ever read….

‘’I offer you knowledge and the desert.’’

Simon Magus: A story set after the Resurrection of Christ. Simon is a man who doesn’t believe, fed up by the large number of disciples, irritated by the new belief. He wants to prove that there isn’t only one truth in the world but a multitude of personal ‘’truths’’. He encounters Peter and accepts a challenge. Well, he should have known better…Gnosticism is a major influence in this poignant tale whose conclusion is open to many interpretations.

‘’It was a beautiful gray November evening with streetlamps flickering in the mist.’’

Last Respects: The death of a prostitute provides the ground for an act of rebellion as people whom society has pushed to the margins strip the graves off their flowers to cover the last residence of poor Mariette. Set in Hamburg during the early 20th century, full of images of a cruel and yet strangely romantic era…

‘’In that distant year of 1929, one approached Belgrade via the Sava Bridge, probably with the same joy of arrival as one feels today.’’

The Encyclopedia of the Dead: A woman, who has recently lost her father, travels to Stockholm. In the Royal Library, she discovers the volumes of an encyclopedia whose entries are dedicated to every ordinary human being. As she starts reading about her father, we follow her thoughts and perhaps begin to contemplate on the significance of all of us. Most of us will remain unknown after our death. No entry in any encyclopedia will be dedicated to us. And yet, aren’t ordinary people the ones who lead History to her eternal circle? What would the ones in power do if it weren’t for their simple, common followers? What if we come to think of the story as a parable for a troubled past, a fragile present and an uncertain future?

The Legend of the Sleepers: This story is based on the legend of the 7 Sleepers, the Roman noblemen who converted to Christianity while in the court of Decius, an emperor of pagan beliefs.

‘’This story does not begin abruptly, in medias res, but gradually, as when night falls in the woods.’’

The Mirror of the Unknown: For me, this is the jewel of the collection. The youngest girl of a Jewish family in Hungary during the 19th century witnesses a tragic moment of the future through a looking glass bought from a gypsy. A heartbreaking story loaded with political, historical and social connotations.

‘’If I understood correctly, there is nothing left.’’

The Story of the Master and the Disciple: A tale set in Prague with reference to Kabbalah and Mysticism and with the ingratitude of a mediocre disciple towards his gifted master.

‘’At that moment, as if by command, the drums began to beat, as sinister and monotonous as rain.’’

Pro Patria Mori: Most of us are taught that we are obliged to die to defend our country. To what end? In our story, a young delusional aristocrat awaits his execution. His mother’s sole purpose is to save appearances. A tragic fable on the futility of politics, ambitions and the eternal shedding of innocent blood for some ‘’higher’’ purpose that constantly changes…

‘’We hear terrified cries for help, then a few isolated shots finishing off one of the children. And then the heavy silence of the Siberian night.’’

The Book of Kings and Fools: A harrowing story of religion, revolution, propaganda. Of atrocities, despair and the never ending idiocy of humans to believe everything they’re told to, to live according to their prejudice…

Red Stamps with Lenin’s Head: An unnamed woman claims to be the lover of a famous deceased poet and condemns all critics of his work through a letter to his biographer.

A collection about deception, misconception, futility, violence and the darkness we sadistically created in ourselves and in the lives of those we love. A writer that was taken too soon….

‘’History is written by the victors. Traditions are woven by the people. Writers fantasize. Only death is certain.’’

…and in these four sentences lies the whole essence of the blood-crazed world we’ve created through centuries….