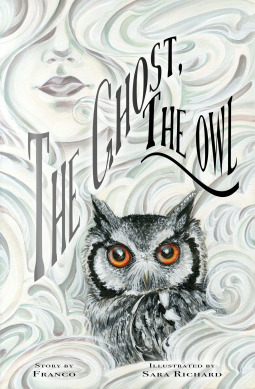 Title: The Ghost, The Owl

Sometimes we discover little gems out of nowhere. We, obsessed readers as we are, have experienced this countless times. It is one of the greatest joys of reading. So, three nights ago as I was waiting for the L.A.Clippers game to start, I started browsing Edelweiss and the title ”The Ghost, The Owl” caught my eye. Yes, well, obviously. Ghosts, owls….This had my name written all over. The only thing that made me hesitate was the fact that comics don’t seem particularly appealing to me but the few times I’ve tried my luck with the genre haven’t disappointed me. This beautiful work was no exception.

The ghost of a young girl comes in a swamp. She can’t remember anything from her time among the living and a young owl decides to help her discover the reason that caused her death. Naturally, they come across pure, kind-hearted people and despicable human beings who want to destroy everything and everyone that resist their vile advances. The decision of the owl is a violation of the law that forbids any kind of intervention in the lives of the humans and thus, an unusual, beautiful journey begins.

I was surprised by how poignant the plot of this comic was. Fellowship, hope, loss, the chance to survive, to defeat the evils in our life, to start again. The notion that, sometimes, you have to cross certain boundaries and ignore restrictions, otherwise you will lose yourself. I was moved and impressed by the beautiful illustrations by Sara Richard. I think they were extremely vivid- almost too vivid- and the dialogue was quite satisfying. There was a modern Gothic touch that brought the whole effort together and created a thoughtful, skillfully artistic comic.

Irrelevant Point n.1 : I was so impressed by this that I felt confident enough to try my luck with another comic titled ”The Lost Path”, a story set in a strange forest. Bring all the Gothic comics to this metalhead.🤘

Irrelevant Point n.2 : This is the review where I disclose my favourite NBA team. Utterly useless information but I feel talkative today.🏀🏀

Many thanks to Action Lab Entertainment and Edelweiss for the ARC in exchange of an honest review.