Title: The Bloody Chamber and Other Stories

“My father lost me to The Beast at cards.”

A recent discussion with Konstantin-one of my best friends in Goodreads- prompted me to read this collection a little sooner than I had planned. And it was an utterly fascinating experience. I knew I was going to love it and my expectations were justifiably high. 10 exceptional short stories paying homage to classic fairy tales and especially to Charles Perrault. From ”Bluebeard” and ”The Beauty and the Beast” to ”Puss -in- Boots” and ”The Snow Child” written in a unique, sensual, dark language.

The Bloody Chamber :In my opinion, the jewel of the collection. This is a story based on “Bluebeard”, one of my favourite fairy tales because I’m weird and I like it:) Seriously, though, this is a beautiful showcase of Carter’s immense talent. She inserts elements from the dawning of Gothic Fiction and crafts a perfect story. The legend of Dracula, Carmilla, the Iron Maiden. As a young woman, who finds herself amidst the journey of marriage to a strange count, discovers sexual liberation, perversion and death. I loved the language in this one, full of underlying sensuality and the blurred line between pleasure and despair. 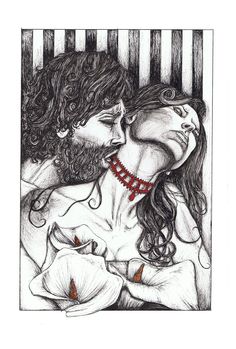 The Courtship of Mr Lyon : A story based on “Beauty and the Beast”. Carter kept the most well known features of the tale intact. Sometimes, the best retellings are the ones that stay close to the original source and this was definitely the case here.

The Tiger’s Bride : The second story based on “Beauty and the Beast”. A young woman of aristocratic origin travels from Russia to Italy. The Beast becomes a tiger in a tale full of weird twists that make the ending shocking and powerful. Carter shows that finding your identity is essential for both sexes and the descriptions are poetic and vivid. A story of winter and spring…

Puss-in-Boots : A tale based on the story by Giovanni Francesco Straparola. “Puss in Boots” had never been among my favourite fairy tales but Carter manages to combine it with Rossini’s Il Barbiere di Siviglia and Figaro is turned into a genius, cynic and all-around spectacular feline. An entertaining story that reads like a true opera buffa. 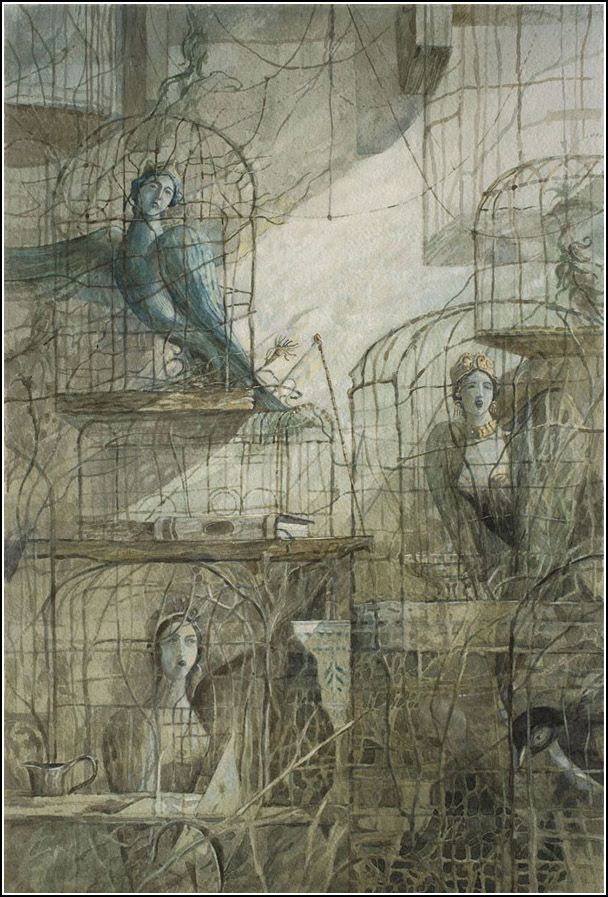 The Snow Child : There are many versions of this fairy tale. Carter chooses the most shocking, violent, dark variant, a twisted vision of a tormented Snow White. It is a short tale that strikes at the heart with its dark themes of necrophilia, abuse and lethal jealousy.

The Lady of the House of Love : “A girl who is both death and the maiden.” Carter combines the tale of “The Sleeping Beauty”, the legend of Elizabeth Bathory and the tale of Dracula to create a story set in the Carpathian region during the turn of the previous century that is nothing short of a masterpiece.

The Werewolf : It makes me sad that in our current times, books of dubious (to put it mildly) quality have transformed such haunting and fascinating creatures into a fad of a horrible pop culture. Thankfully, writers like Carter do not refuse them the position that centuries of lore have granted to these tortured creatures of the night. A tale based on “Little Red Riding Hood”, enriched with folklore from Walpurgisnacht and with an interesting heroine of dubious motives.

The Company of Wolves : “The wolfsong is the sound of the rending you will suffer, in itself a murdering.” A second story based on “Little Red Riding Hood”. The wolf is the protagonist. The beauty, the agility, the danger. Carter makes use of the legends and fables about the werewolf juxtaposed with the innocence of the children and the allure of the forbidden. A story that is open to many interpretations…

Wolf-Alice: This is the third story based on “Little Red Riding Hood” and the one fully demonstrating society’s obsession to have us all the same, denying us the right to be what we want to be. A young woman defies religious and social rules and discovers that compassion and companionship are sometimes waiting where we least expect them.

The stories are rich in visual scenes, faithful to the spirit of their original sources and composed of themes that are difficult and demanding. Carter speaks of female emancipation, sexual liberation, the heavy chains of patriarchy and society’s expectations of women. Carter defies the stereotypes and clearly demonstrates the desire for the identity of the heroine who saves herself instead of waiting for the Knight. Even when she falters, it’s by her own choice and she accepts the consequences. What are the canonical fairy tales, in any case? Didactic parables of the notion that “transgressions” turn people into monsters. Anything that doesn’t meet the common expectations of appearance and behavior is considered demonic. But we, as women, don’t need to read tales to discover there are monsters in the world. We’ve seen them. We have been facing them for centuries. We still fight against them. We always will…

It is my sincerest conviction that fairy tales, especially retellings such as these, can reveal more about the human nature than any “serious” novel or philosophical work. Carter’s tales couldn’t have been more meaningful, more relevant to our current times, mirroring issues that concern us constantly. That is if we are willing to look deeper and search for them. These tales are written in beautiful language but this is merely a “technical” issue. What matters is what they try to tell us and show us. This is beyond labels such as “Horror” or “Gothic” or “Literary Fiction”. It is about ourselves and our identities.

“The lamb must learn to run with the tigers”