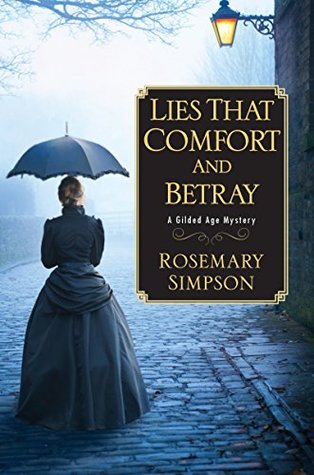 Title: Lies That Comfort and Betray (A Gilded Age Mystery #2)

”I’ve learned to prefer the starkest of truths to the most comforting of lies.”

In my opinion, there is only one city whose gritty historical background can be compared to London’s and, naturally, I’m referring to New York. The diversity of the population, the vast gap between the upper and lower classes compose a fascinating scenery of a city that was trying to find its identity at the time. I think that Simpson succeeded in all levels with this mystery novel.

The setting is in New York during the late 19th century and in London, Jack the Ripper has brought terror in the Londoners’ hearts. In New York, young women who work as maids for wealthy families are murdered in a horrible manner that echoes the crimes in Whitechapel. The authorities of the city believe there is a copycat of Jack the Ripper walking among the respectable citizens. Geoffrey Hunter, a former Pinkerton, is the owner of an investigative law firm. Prudence MacKenzie, a young heiress, is his right hand and the major brain of his enterprise.

I have the weird habit of beginning a mystery series with the second of even third book. I find that it gives me better insight into the development of a character and, many times, I don’t waste time on background information since the important events of the past will always find themselves in the narration. I wanted to start The Gilded Age series for quite some time and I wasn’t disappointed. Both the premise and the execution were satisfying. Simpson depicts a realistic image of New York, fully delving into the bleak scenery and some of the darkest of themes. She uses the issues of bigotry and religious fundamentalism in a clever way, along with the prejudices and the stereotypes that forced the classes to engage in a battle that led nowhere. Add certain hints of sexual perversion, illegal abortions and the marginalization of the immigrants and the mix gets quite interesting.

Prudence and Geoffrey are very interesting, well-drawn characters that support the story and make you care for them. The dialogue is quite good and faithful of the era and the descriptions are vivid although I could do with a little less repetition.

As a super fan of ”Ripper Street” and ”The Alienist”, I cannot but recommend this wholeheartedly.

Many thanks to Kensington Books and NetGalley for the ARC in exchange of an honest review.