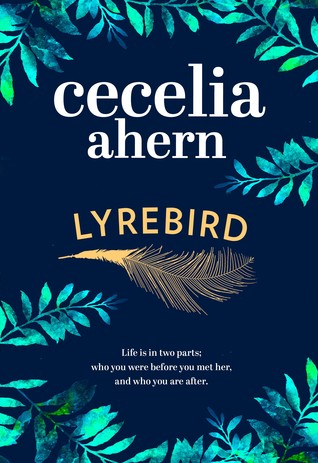 I’ve always had a weird relationship with Ahern’s books. I’ve never been particularly intrigued by the stories presented in her novels, until ‘’The Marble Collector’’ attracted my attention. I loved it, even though I faced certain issues with the construction of the characters and the dialogue. ‘’Lyrebird’’ won me over with its beautiful front cover and with the blurb that reminded me of the film ‘’Nel’’ with Jodie Foster and Liam Neeson. I thought I’d find a haunting novel of secrets and feelings. Unfortunately, the result was quite different….

Solomon comes across Laura in a forest in the south-west of Ireland. The young woman has a unique ability to produce sounds as if they’re recorded inside her, mirroring her feelings and the thoughts of others. His girlfriend, Bo, is a filmmaker and when she becomes interested in Laura, she carries her to Dublin. This is when the shocking experience of living in the metropolis tears everything down. Now, this may sound interesting and it is. Believe me. The story had so much potential and Laura is a satisfying heroine. The problem is that the way the narrative was developed seemed to me quite fickle, even amateurish. The descriptive passages had a few moments of beauty but, for the most part, they read as a mediocre example of chic-lit of dubious quality. Now, I don’t read much of that genre so I’m not the best judge. However, I know the elements that constitute an example of fine writing and Ahern disappointed me. Too much repetition and hysterics and unnecessary drama. What I thought would be a poignant story about the difficult transition from a rural environment to the modern city and a young woman’s journey of self-discovery, quickly became a soap-opera. I am not interested in the backstage drama of reality TV and talent shows. I find them loathsome, disgusting and tokens of the lowest levels a human being can reach. I don’t want a dialogue that contains an unnecessary (and I stretch the adjective ‘’unnecessary’’ because I am quite a potty mouth myself) f-bomb every other line.

Another problem I faced had to do with the characters. Laura is quite well-structured. Ethereal, clever and kind. I could understand her motives to escape her seclusion even though she betrayed her principles, so this was a success on the writer’s part. Solomon was quite sympathetic but a bit meek. Bo, though…I don’t know what Ahern had in mind. She is practically abominable. Irritating, insensitive, rude, a woman of the lowest possible quality. Ahern was unable to redeem her, in my opinion. I fully agree with a reviewer who stated that it was almost as if she tried her best to create such an awful character. The same applies to Rory. These 2 characters were an utter waste and terrible examples of inconsistent writing.

There were a few successful parts, though. The doubts and expectations of Laura were well- portrayed. The way the media swallowed her and tore her to pieces was realistic, raw and plausible. I also found the romantic relationship in the story balanced and realistic and yes, I do believe in love at first sight, thank you very much.

I had trouble rating ‘’Lyrebird’’, I must admit this. I still don’t know. My heart says 2 stars, my minds demands 3. Despite the numerous problems, the story kept my interest until the end and this is always a positive sign. In addition, this novel had the unfortunate fate of finding itself in the middle of exciting, unique reads and although I always try to isolate my mind from one book to the next, ‘’Lyrebird’’ paled in comparison. I’d hate to be unfair and I know that many will like this book. However, my demanding nature couldn’t connect with the writing.