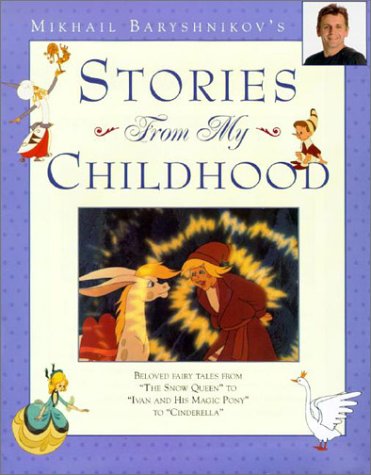 Title: Mikhail Baryshnikov’s Stories From My Childhood: Beloved Fairy Tales from the Queen to Cinderella

In 1998, Mikhail Baryshnikov, one of the greatest ballet dancers the world has ever produced (and will ever produce, in my opinion) hosted a TV series with the title ‘’Stories From My Childhood’’. He introduced a more innocent, more magical world than our mundane, daily one and shared his favourite fairy tales with us. This is a beautiful anthology as a companion to the TV series, enriched with marvellous illustrations that showcase the unique spirit and technique that characterize the artist from this haunting, mystical part of Europe.

What do we find here, then? A bit of everything. A number of classic fairy tales and more obscure ones but no less fascinating. Fairy tales are deeply rooted in the Russian culture, they provided material for beautiful films produced in the Soviet era, they were the basis for some of the most well-known ballet choreographies and are still relevant today if we think that a number of successful novels have been inspired by the dark, haunting tales and fables of Russia.

The Snow Queen, Ivan and His Magic Pony, Cinderella, The Twelve Months and the Snow Girl, The Last Petal, The Golden Rooster, Beauty and the Beast, The Wild Swans, The Nutcracker are only a few of the beauties that await you in the pages of this anthology. It was an utter pleasure to be guided by Baryshnikov in this wonderful journey into the heart of fairytales that have accompanied ages and ages of children and will continue to do so, as long as there are dedicated readers in this bleak world we have come to construct. Misha’s foreword was touching, inspiring, true to a legend that is humble and desires to share a time where innocence and myths used to shade some light into a grim reality.

Do yourselves a favour and read this….