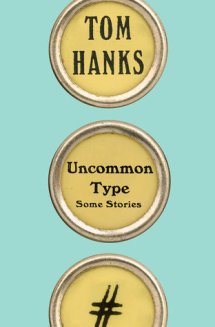 “In her living room she opened the windows to get a bit of breeze. The sun had set, so the first fireflies of the evening would begin to flare in a bit. She sat on the windowsill and enjoyed the cold, shaped pineapple and watched as squirrels ran along the telephone wires, perfect sine waves with their bodies and tails. Sitting there, she had her second ice pop as well, until the fireflies began to float magically above the patches of grass and sidewalk.”

I’m not a Hollywood fan, nor I enjoy watching films all that often. My tastes lean more on British and European Cinema. I don’t read actors’ biographies or books written by celebrities. However, in the case of “Uncommon Type”, it’s Tom Hanks we’re talking about. I can’t think of another actor who makes you feel as if you actually know him, as if every role of his is performed for each and every member of the audience. He is widely loved in Greece, he is widely loved everywhere and quite a few of his films are considered classics of the 7th Art. This collection of short stories is written in a simple, eloquent, flowing writing style. Humane, immediate, confessional. It is a brilliant token of the distinguished American writing, it is the voice of Tom Hanks, the Everyman, and if you don’t like it, well….you need Jesus in your life.

In 17 stories, Tom Hanks creates characters out of life. The inspiration seems to be the types of New York (mainly) residents, even some of the roles he has performed in his astonishing career. Each story is embellished with the photo of a typewriter that plays a characteristic part in many of the stories. The importance and joy of writing is everywhere, the need to communicate feelings and thoughts first to ourselves and to the people around us. His themes are universal and relevant to our daily lives. Love, companionship, the errs and joys of the past, self – dignity, immigration, togetherness and a deep, acute feeling of nostalgia. A journey through USA, with the metropolis of New York ever present, in one way or another.

So, without further ado, the 17 stories are:

Three Exhausting Weeks”: Two best friends decide to become an item, but they seem to be highly incompatible. Poor guy starts feeling as if he has signed for the Olympics preparations or the NASA training. Anna is one of the most authoritative people to ever grace a book and this story is hilarious and nostalgic at the same time.

“Christmas Eve 1953”: A beautiful Christmas story that takes us back to 1953 and to 1944, the D-Day, its aftermath and the wounds, physical and psychological that are inflicted upon those who survived the inferno in the shores of Normandy.

“A Junket in the City of Light”: A story about a rising Hollywood star and the ordeals coming from exhausting press junkets and over-demanding studios. Paris, during the night, provides the beautiful setting.

“Our Town Today with Hank Fiset- An Elephant in the Pressroom” : A glimpse into the conflict between the printed version of a newspaper and the coldness of reading your newspaper on a digital device.

“Welcome to Mars” : A sad tale of the bonding between a father and a son, a story full of the sun, the sea and surfing.

“A Month on Greene Street” : A story set in the sleepy suburbs, during the dog days of August. A divorced mother of two starts a new life in a welcoming, peaceful neighborhood. This is a text filled with the laughter of children, the soothing early evening atmosphere, and a certain kind of hope for starting anew.

“Alan Bean Plus Four” : We revisit our unique couple of “Three Exhausting Weeks” in a story that brings “Apollo 13” to mind.

“Our Town Today with Hank Fiset- At Loose in the Big Apple” : A celebration of New York in the form of an account from our grumpy (but sweet) journalist with a tiny bit of nostalgia for a more innocent era.

“Who’s Who?” : The Big Apple is the city where dreams are supposed to come true. However, young Sue from Arizona, an aspiring actress who can act and sing and dance finds her dreams crushed all too soon. Until, a sudden appearance proves that possibly, dreams can still become reality…A beautiful story of youth and aspirations set in 1978.

“A Special Weekend” : The story of a boy who loves typewriters and airplanes, living a difficult life after the divorce of his parents. I confess that the end gave me chills…

“These Are the Meditations of My Heart” : A story of impeccable writing and immense beauty that reminded me -once again – how much I love typewriters.

“Our Town Today with Hank Fiset- Back From Back In Time” : Our favourite reporter takes a trip down memory lane escorted by his trusted typewriter.

“The Past Is Important to Us” : This story was a true surprise. A combination of Historical Fiction and Sci-fi where a scientist travels back to the 1939 for the sake of a woman. An impressive look into a potential future and a tale that shows how closely linked the past and the present actually are.

“Stay with Us” : This story is written in the form of a film script and therefore, it really flows. Departing from Las Vegas, a wealthy, kind hearted businessman and his personal assistant find themselves in the middle of nowhere and change the lives of the residents, while finding a new meaning in their own. This is a story full of happiness, camaraderie and trust.

“Go See Costas”: In this story, Mr. Hanks celebrates diversity, multiculturalism and companionship, without whitewashing the problems and the fears faced by the immigrants. His love for Greece is more than well-known, and here we find Greeks, Cypriots, Bulgarians. Set in the heart of the era of immigration to New York, this story is a hymn to the abilities and persistence of hardworking people who desire a better life, without forgetting their principles and without resorting to shady means. A tale that shows that people may come from different backgrounds (economical, educational, ethnic), but these factors mean very little when we are faced with adversities. In the end, it is the heart that matters. A story that couldn’t be more relevant to the chaos and conflicts of our times.

“Our Town Today with Hank Fiset- Your Evangelista, Esperanza” : The grumpy reporter gives the spotlight to Esperanza who reminds us that there is actually life without a smartphone, Facebook and the like.

“Steve Wong Is Perfect” : The last word belongs to the insane gang of the beginning and to bowling. Hilarious and nostalgic.

This is a collection to be cherished and kept as a good friend to whom we may return when in doubt and in need of a comfort. Not because the writer is named Tom Hanks and heralded as one of the finest actors to ever grace our screens. This is a book of simple, unpretentious beauty. 17 stories of people who could be our neighbours, our friends, our lovers, our parents, written in the immediacy and clarity that characterizes the majority of American Literature, a trustworthy volume like a trustworthy Royal typewriter. Let it carry you away….

Many thanks to Penguin Random House, Tom Hanks and NetGalley for the ARC in exchange for an honest review.